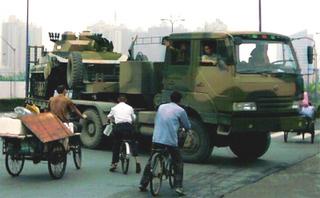 Xinhui posted this image of an unknown AFV with on July. 22. It appears to have a previously unseen turret on a WZ501 chassis.

A quick look through Norinco's website revealed the mystery turret to be one equipped with active protection systems. (Norinco's English site is a total hash job, seems like somebody sent the Chinese site through Babelfish and was done with it. Norinco's English name for it is "Initiative Protecting System". The Chinese name is 主动防护系统, which means active protection.) Perhaps it is the Chinese version of the Russian Arena. The sensor post in the middle (LWR/IR sensors?) does not resemble the radar rack associated with the Arena, and it is missing on the AFV in the pic Xinhui posted. I also wonder what those things under the shields really are. It appears those boxes are rotable, but the shield may not be, which would severely restrict their FOV.

I am not surprise that China is developing active defense systems AFVs, but I am surprised that Norinco is already marketing one, and that we haven't seen one on an MBT, yet. Wonder if it works in a similar manner as the Arena.For that matter, we don't even know if this is a vehicle protection system. For all we know if this could be part of a unit/area defense system mounted on dedicated vehicles (perhaps to protect armor and mech formations), although the lack of anything long range seem to argue against that. OTOH, if it is a HMG position near the driver, it would suggest that this is a dedicated vehicle with a turret specifically for the defense system.

Desperado6 wrote that sensor post "may not be a laser warning receiver at all, and in fact since it's so different from the JL-3 system it may be wrong to assume that. It could be that one window is a UV sensor and the other IR to detect and correlate missile launch plumes."

Much of this is speculation at this point, we need more photographs of the both the active protection system as well as the AFV.

Here is a picture of the Russian Arena system on a T-80U for comparison, with the characteristic radar rack on top of the turret and grenade launchers.