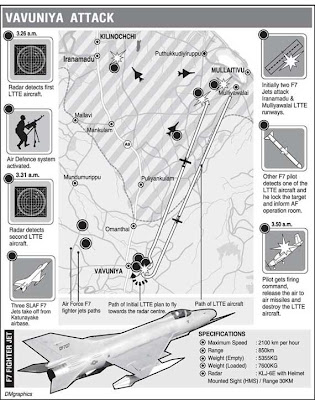 Tuesday’s failure to shoot down a single LTTE aircraft despite timely detection by radar has jolted the SLAF into investigating its limitations amidst evidence that the enemy has acquired a capability to neutralise the threat of a heat seeking missile attack.

The initial detection had been made north-east of Mannar at 10.18 p.m. by 2D radar installed by the Government of India at the SLAF base at Vavuniya.

Thaladdi had come under attack within minutes after the detection, the source said.

Both the Indian radar and a Chinese 3D radar station located in the Western Province had detected the enemy aircraft but interceptors failed to carry out a successful missile strike. 2D radar provides direction and the distance of a target whereas the Chinese radar provides even the altitude of a target.

Last September, a heat seeking missile fired by an interceptor brought down one of the two LTTE aircraft returning to their base after attacking Vavuniya air base. Although the LTTE denied the SLAF claim, a senior military official pointed out that the LTTE had deployed only one aircraft to carry out Tuesday’s operation. Each previous raid directed at military and economic targets had involved two aircraft, the official said. "May be they are now left with one aircraft," he speculated. But the possibility of their having additional aircraft couldn’t be ruled out, he said.

The SLAF said that after dropping two bombs on Thaladdi base, the aircraft had veered westwards towards the sea and flew southwards before moving back towards land at a point near estuary of the Kelani River. The SLAF said that the aircraft had taken almost the same route back to its base in the Vanni. Under anti-aircraft fire, the LTTE plane had dropped two bombs over the Kelanitissa power facility.

The damage caused to two power stations, combined cycle power plant and diesel powered Fiat GT 7 installed within the Kelanitissa complex would cause a severe deficit in the country’s electricity demand.

Although Power Minister John Seneviratne and his Deputy Mahindananda Aluthgamage played down the issue, The Island learns that the GT 7 had been severely damaged. After inspecting the damaged facility, Seneviratne said that it would take about six months restore GT 7.

Addressing a hurriedly arranged press conference at Kelanitissa, the minister expressed confidence that the CEB would be able to meet any shortfall of supply through other means. Kelanitssa workers told The Island that both stations had been switched off pending investigations. They said that the GT 7 generated 110 mega watts while the combined cycle power plant generated 165 mega watts. Altogether, they generated 275 mega watts out of 530 mega watts produced by Kelanitissa facility.

They said the severe damage caused to the combined cycle power plant would deny the country the capacity to generate 55 mega watts almost free of charge. Of this particular plant, 110 mega watts were generated by using naphtha and 55 mega watts produced as a byproduct, they said. "This would be heavy burden on the taxpayer," a senior employee told The Island.

The SLAF is responsible for a series of highly successful air strikes against the LTTE since August 2006. The LTTE fighting capability has been greatly reduced to SLAF action directed against a range of targets.
Posted by Coatepeque at 2:36 PM

I didn't know Tamil tigers had Aircraft. Is this a F-7 Vs. F-7 scenario?

the LTE plane was a small prop plane. it almost certainly would not have enough heat signature for early PL missiles

weren't the pilots trained to use guns? there was simply no escape for the LTE.