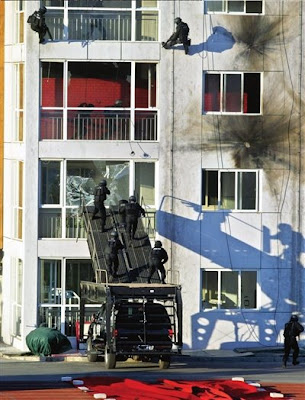 Since the Pakistani are in Town, might as well.

BEIJING, Dec. 13 (Xinhua) -- Beijing armed police conducted an anti-terror drill Saturday to strengthen its preparedness against militant attacks like the one in Mumbai.

The scenario was that a group of terrorists rocked the city with a series of explosions and kidnapped hostages at a hotel.

Members of the Beijing Special Armed Police Unit (BSAPU) used a helicopter and ropes to get 10 meters down to the ground within two seconds. They then shot targets of swaying eggs 15 meters away within 1.5 seconds to practice killing terrorists. After breaking through windows, police were able to rescue hostages.

"The drill was aimed at preventing terrorist attacks, especially after the Mumbai attack which had definite targets and careful plan. We noticed that the terrorists attacked different sites of the city in different ways such as explosions, shooting, kidnapping and a gunfight with the police," said Xiao Yong, the head of the unit.

"We have done thorough research on different kinds of attacks and made a complete and cohesive counter-terrorism plan."

Members of the BSAPU are carefully selected and specially trained. They are each armed with a wide array of weapons and equipment worth more than 300,000 yuan (43,795 U.S. dollars).

Founded in 2005, the unit arrests armed criminals, counters terrorism, conducts security checks and safeguards the land and air within Beijing.

Posted by Coatepeque at 4:27 PM