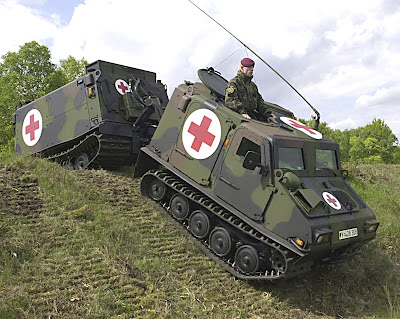 The all-terrain tracked ambulance which was displayed for the first time adopted the structure of tracked dual-car body and installed with the satellite positioning system. With such a vehicle, the frontline combat troop units (elements) can implement cross-country maneuver under such special terrain conditions as desert, marshland, tidal land and snowfield and accomplish rapid and safe transportation and on-the-way first-aid for the wounded from battlefield (disaster-stricken site).

The field operation vehicle has the function of remote medical consultation, which can link the forefront field medical agencies and rear hospitals to carry out remote expert consultation and offer diagnosis and treatment guidance for the rescue of the wounded under emergency maneuver conditions, and support the early-phase treatment and special treatment of the critically wounded from a distance by relying on the remote medical information network of the PLA.

It’s learned that during the “Peace Mission 2009” joint military exercise, the Wenchuan earthquake relief, the Haiti earthquake relief and the UN peacekeeping missions, the employment of the new generation of military medical equipment enabled the further improvement of the medical support capability of the PLA in implementing diversified military actions.

Posted by Coatepeque at 1:09 PM

Thank you for posting some nice information in your blog.I have bookmarked your blog.

I am also maintaining a blog which includes information about current news.

The information in both of our blog meets the visitors quality.If you provide us a link in your site, it will be benefiting your end users and us.

If u added my link, I will also add your link on my blog.

Hello, I love reading through your blog, I wanted to leave a little comment to support you and wish you a good continuation. Wish you best of luck for all your best efforts. surgical equipment, surgical instruments.


Nice blog ! all the images and contents are very good.!! all the information are available !!! GE 12L