It seems that the PLAAF is not placing all its eggs in one basket --  they are ordering more IL-76s from Rosoboronexport while waiting to commission the new Y-20.

Special thanks to dererd2 and  BB_Bismarck for the photo and the news update. 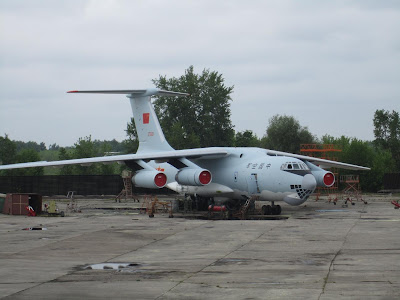 
China is boosting its fleet of Il-76 airlifters with 10 used examples to be supplied by Rosoboronexport. (Photo: Vladimir Karnozov)
November 30, 2012, 11:45 AM
China has ordered 10 used Il-76s from Russia’s arms vendor Rosoboronexport as an interim measure to enlarge its fleet of the heavy airlifters, before the redeveloped Il-476 version becomes available. Sergei Kornev, head of Rosoboronexport’s aviation equipment department, told AIN that his company has already found seven suitable airframes on the secondary market. They are being overhauled before delivery to the PLA Air Force. Rosoboronexport is still sourcing the other three aircraft, which could come from non-Russian fleets.


Kornev declined to provide the exact number of Il-76s China has already received, noting only that Rosoboronexport and its Ukrainian counterpart, Ukrspetsexport, have been involved in sales of new and used Il-76s to the People’s Republic. In addition, the TAPO plant in Tashkent, Uzbekistan, which was the sole Il-76 production location since the 1970s, also supplied some aircraft to China. So did semi-independent Russian entities including LII, the flight-test and research institute, which sold China a couple of Il-76 testbeds outfitted with large rotating antennas mounted atop the fuselage. Presumably, these were the ones used in China’s AEW radar test program.

Some years ago, China sought to buy 50 to 60 new Il-76s from Rosoboronexport, and even signed a preliminary agreement for 38 aircraft in September 2005. The deal was never executed “due to the inability of the plant in Tashkent to build that many new aircraft and fulfill the demand from China,” according to Kornev. He noted that Russia’s focus is now on the Il-476, production of which is being re-launched at the Aviastar-SP plant in Ulianovsk. “One such airplane is already flying, and the customers have been following flight-test progress with interest,” he said.

Russian president Vladimir Putin recently visited Aviastar to inspect the Il-76MD-90A (the Russian air force version of the Il-476). Kornev said that the Il-476 is being offered to India, as well as China. “This version features modern avionics, better payload-range capability, and more powerful and economical PS90A76 engines. It has a large export potential. However, flight-testing could take a couple of years,” he added. Today, the Il-76 is the only heavyweight strategic airlifter type in the inventory of PLA’s Air Force. China attempted, but dropped, indigenous designs of airlifters, powered by local copies of the D30K-series engines that power the Il-76 and Tu-154M.