Is me, or they all get their jacket from Men's Warehouse? 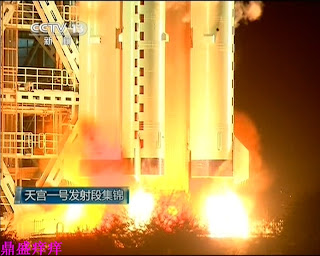 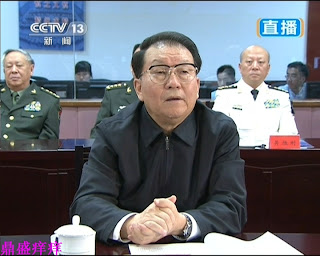 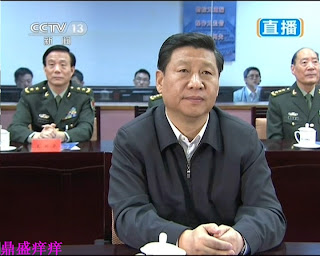 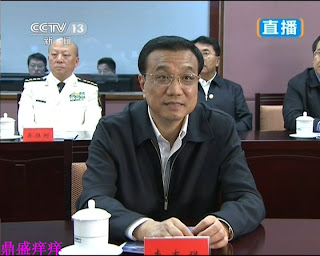 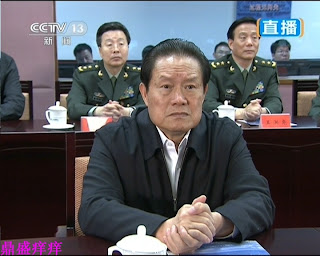 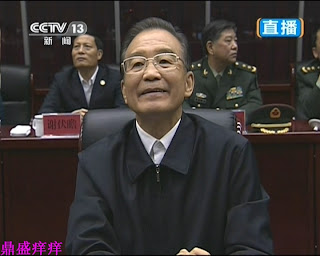 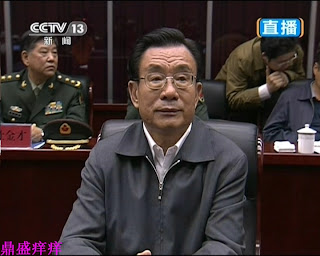 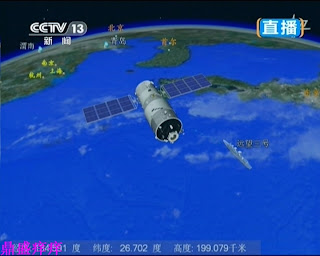 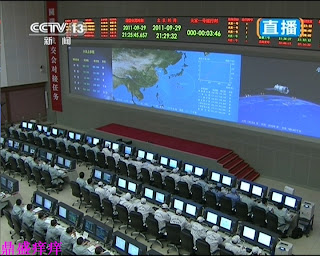 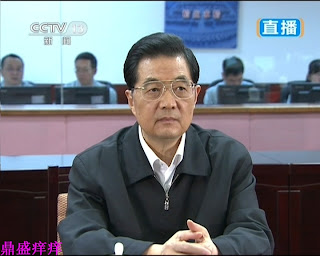 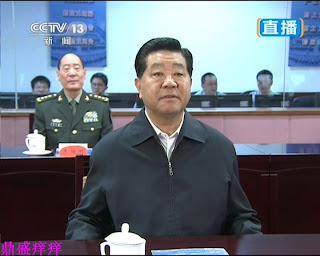 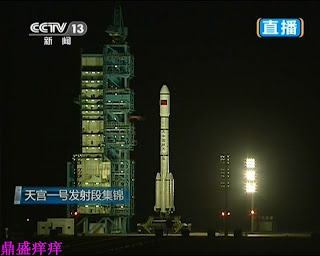 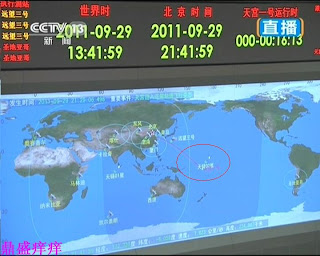 BEIJING, Sept. 29 (Xinhua) -- China's first space lab module Tiangong-1, or Heavenly Palace-1, blasted off at 9:16 p.m. Beijing Time (1316 GMT) Thursday in a northwest desert area as the nation envisions the coming of its space station era in about ten years.

The unmanned module, carried by the Long March-2FT1 rocket, will test space docking with a spacecraft later this year, paving the way for China to operate a permanent space station around 2020 and making it the world's third country to do so.

More than ten minutes after the blastoff, Commander-in-chief of China's manned space program Chang Wanquan announced the launch's success at the control center in Beijing.

The success of the launch, however, is just a beginning, and the real challenge is space docking, said Yang Hong, chief designer of Tiangong module series.

Unlike previous Chinese space vehicles, the Tiangong-1 has a docking facility which allows it to be connected to multiple space modules in order to assemble an experimental station in low Earth orbit.

The Tiangong-1 will orbit the Earth for about one month, awaiting the arrival of the Shenzhou-8 unmanned spacecraft. Once the two vehicles successfully rendezvous, they will conduct the first space docking at a height of 340 kilometers above the earth's surface.

The Tiangong-1 flies at a speed of 7.8 kilometers per second in orbit, which leaves ground-based staff an error of less than 0.12 meter to control the two vehicles to dock in low gravity. China has never tried such test and could not simulate it on the ground.

After two docking tests with the Shenzhou-8, the Tiangong-1 will await Shenzhou-9, to be followed by Shenzhou-10, which will possibly carry a female astronaut, in the next two years, according to the plan for China's manned space program.

If the astronaut in the Shenzhou-10 mission succeeds with the manual space docking, China will become the third nation after the United States and Russia to master the technology.

Hu told the engineers, commanders and other workers at the control center to do every job in a "more aborative and meticulous" manner to ensure the success of the country's first space docking mission.

Other members of the Standing Committee of the Political Bureau of the Communist Party of China (CPC) Central Committee, including Wu Bangguo, Jia Qinglin, Li Changchun, Xi Jinping, Li Keqiang and Zhou Yongkang, were also present.

Premier Wen Jiabao went to the Jiuquan Satellite Launch Center to watch the launch process with He Guoqiang, member of the Standing Committee of the Political Bureau of the CPC Central Committee.

Chinese people were inspired by the successful launch.

"The Tiangong-1 has gone into the dark sky! We Chinese are on the way to inhabiting the vast universe," wrote Qichaoxiguanghai on Sina Weibo, China's most popular microblog service provider.

"I heard the news of the Tiangong-1's launch from the radio on a ship to Yangzhou," wrote microblogger Xingfufeiafei. "I am proud to share the pride that shakes the world. The pride of our nation is once again deep in my heart."

With a room of 15 cubic meters for two to three astronauts to conduct research and experiments in the future, China's first space lab module is hardly the size of any palace.

But its name Tiangong-1, or "Heavenly Palace-1," speaks of a dream home from Chinese folklore, long envisioned as a secret place where deities reside.

Thanks to an economic boom that has continued since the end of the 1970s, the Chinese government approved and began carrying out its three-phase manned space program in January 1992.

The first phase, to send the first astronaut to space and return safely, was fulfilled by Yang Liwei in the Shenzhou-5 mission in 2003. After another two astronauts made successful extravehicular activities in the Shenzhou-7 mission in 2008, China entered the second phase of its space program: space docking.

If the previous two steps succeed, China plans to develop and launch multiple space modules, with a goal of assembling a 60-tonne manned space station around 2020 in which Chinese astronauts will start more research projects in space.

Premier Wen said at the launch center that the breakthrough in and command of space docking technology marks a significant step forward in China's "three-phase" manned space program.

He encouraged all the participants in the program to do a good job to "win the vital battle of space docking."

The success of Thursday's launch of the Tiangong-1 also eased the pressure on China's space engineers following an unsuccessful lift-off in August when a Long March-2C rocket malfunctioned and failed to send an experimental satellite into orbit.

To acquire a new and bigger rocket capable of loading a future space station's components that will be much heavier than the Tiangong-1, research and development on a carrier rocket that burns more environmentally-friendly liquid-oxygen-kerosene fuels is in progress.

The Long March-5 and -7 carrier rockets with a payload to low Earth orbit of more than 20 tonnes will take test flight as early as 2014, said Song Zhengyu, deputy chief designer of rocket for China's manned space program.

China's progress in space technology is stunning. The Tiangong-1 will dock three spacecraft one after another, which will cost less time and money than docking experiments the U.S. and Russia did.

The space station now still functional is the International Space Station (ISS) initiated by the United States and Russia, which cooperate with other 14 nations at about 360 kilometers above the earth.

However, as the U.S. ended its space shuttle program after the Atlantis' last mission in July, the ISS is scheduled to be plunged into the ocean at the end of its life cycle around 2020, when China is expected to start its era of space station.

Moreover, scientists on the ground will also conduct experiments on photonic crystal, a new material expected to revolutionize information technology, in the low-gravity environment inside the Tiangong-1 as these experiments would be extremely difficult to conduct on the earth's surface.

"China is clearly becoming a global power and its investments in areas like technology and exploration reflect this," said Peter Singer, a senior fellow at the Washington-based Brookings Institution.

"It is a natural result of the growth in political and economic power and is to be expected," Singer said in an interview with Xinhua conducted via email.

"What remains at question is what kind of presence China will play on the international stage, cooperative, working with international partners, or going it alone?" Singer said.

The scholar, however, can find an answer to his question from the words of Zhou Jianping, chief designer of China's manned space program.

Zhou told Xinhua that China will turn its future space station into an international platform for space research and application to share space achievements with partners.

"The Chinese nation has pursued peace since ancient times," Zhou said. "China's ultimate intention with the space program is to explore space resources and make use of them for mankind's well-being."

According to Wu Ping, a spokesperson with China's manned space program, scientists from China and Germany will jointly carry out experiments on space life science at the Shenzhou-8 spacecraft.

A U.S. astronaut on the Atlantis's final mission has said China's first experimental space station will be a welcome addition to the international brotherhood.

"China being in space I think is a great thing. The more nations that get into space, the better cooperation we'll have with each," astronaut Rex Walheim said during an interview with Reuters.

So far China's Long March rocket series has successfully sent more than 20 satellites into space for the United States, Australia, Pakistan and other countries and regions.

One Chinese scientist and five international peers have also participated in Russia's Mars-500 Program, a ground-based experiment simulating a manned expedition to Mars.

The unmanned module, carried by Long March-2FT1 rocket, will test space docking with a spacecraft later this year, paving the way for China to become the third country in the world to operate a permanent space station around 2020. Full story

Other members of the Standing Committee of the Political Bureau of the Communist Party of China (CPC) Central Committee, including Wu Bangguo, Jia Qinglin, Li Changchun, Xi Jinping, Li Keqiang and Zhou Yongkang, were also present at the control center. Full story

Posted by Coatepeque at 6:25 PM