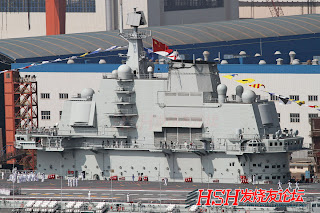 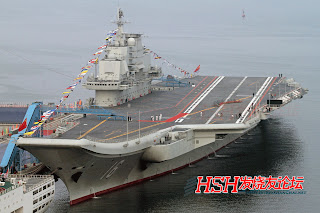 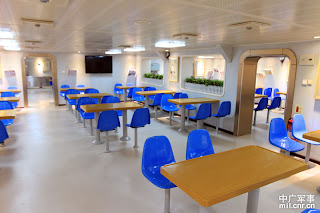 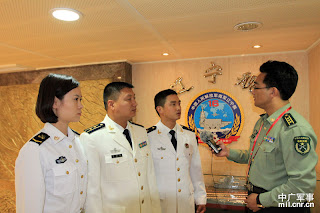 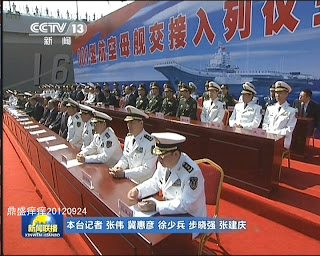 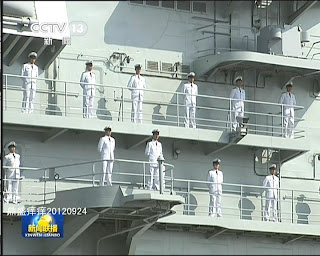 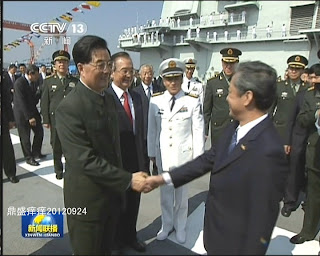 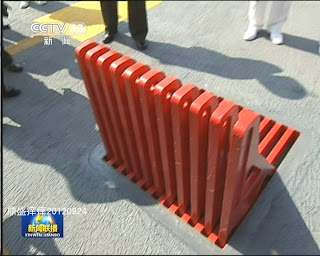 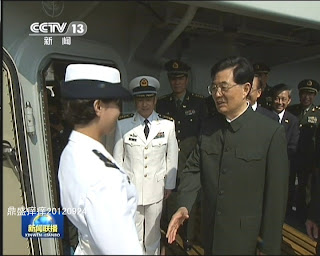 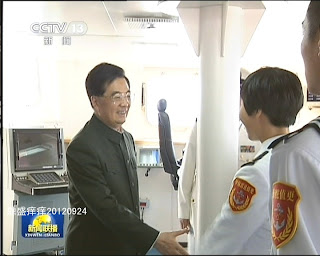 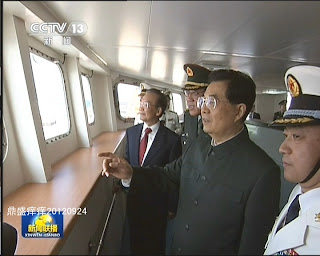 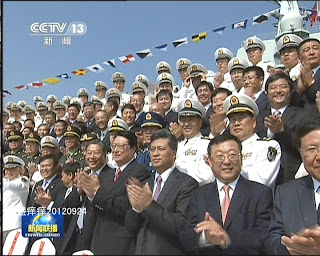 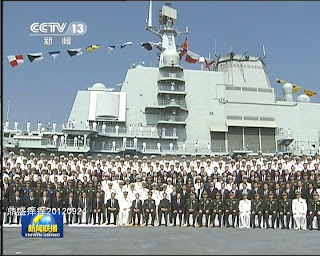 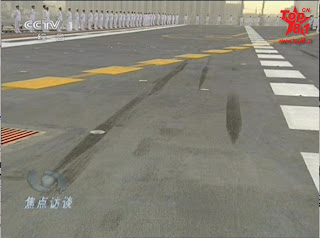 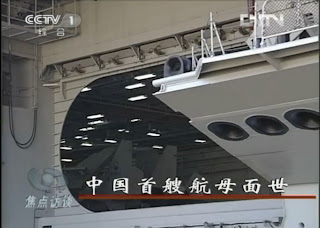 Dr Andrew Erickson and Gabe Collins have done a terrific job in keeping us up-to-speed on the development of the Liaoning with this latest write-up.   So enjoy.

Introducing the ‘Liaoning’: China’s New Aircraft Carrier and What it Means

By Andrew Erickson and Gabe Collins
China’s first aircraft carrier, now referred to as the “Liaoning ” by China’s Ministry of National Defense, has been officially “delivered and commissioned” to China’s navy, according official Chinese media. The handover ceremony, with top Chinese leaders presiding, took place on the morning of September 25 at a naval base in Dalian, a port city in northeast China’s Liaoning province. 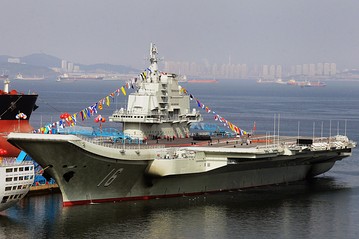 Just as Liaoning the province was created when existing northeastern provinces and municipalities were merged and integrated into a more powerful whole in 1954-55, so too “Liaoning” the carrier integrates a mix of building blocks into a warship that has the potential to bolster China’s regional influence—and also to force China’s leaders to confront perhaps the most complicated naval diplomacy questions in the PRC’s history.
The Liaoning’s commissioning matters, both symbolically and in terms of China’s naval power and regional influence. The largest ship to be delivered to the Chinese navy to date, the carrier when operational could have a significant influence on regional maritime disputes, in particular China’s smoldering conflicts in the South China Sea.
Names Matter…
Chatter about the commissioning of China’s first carrier began in early September, when photos surfaced online showing the carrier with the hull number “16,” followed by reports in local media that the vessel would be named the Liaoning, after the province that contains Dalian Naval Shipyard, where it has been refitted.
The carrier was built using the hull of an old Ukrainian carrier called the Varyag. Rumors had long circulated among Western analysts that the carrier would eventually be renamed the Shi Lang, after a celebrated Qing dynasty admiral.
In July 1683, Shi Lang used 300 warships and 20,000 troops to defeat the Zheng family, which ruled Taiwan, in a conflict known as the Battle of Penghu. The victory enabled Taiwan’s formal incorporation into the Qing polity, as a prefecture of Fujian Province. This was an historical first: Neither the Ming nor any previous dynasty had ever attempted to incorporate Taiwan directly in to official mainland administration.
Because of Shi’s aggressive efforts to bring Taiwan under mainland administration and his allegedly corrupt and overbearing post-war actions as an official vis-à-vis the island, naming China’s first aircraft carrier after him would send the wrong message for cross-Strait relations, whose stability Beijing seeks to encourage in order to facilitate reunification.
PLA Navy (PLAN) ship naming conventions suggest that ships are typically named after Chinese localities. The rare exceptions in which PLAN ships are named after individuals include training vessels (Deng Shichang and Zheng He) and research ships (Li Siguang ), but not larger combat-operations-focused vessels. Since China’s first aircraft carrier will be its largest and most prominent warship, it would be logical to name it after one of the largest Chinese localities, particularly the one in which it was refitted—hence, “Liaoning.”
But Actions Speak Louder than Words…
Whatever the official nomenclature and symbolism, however, the Liaoning is attracting the world’s attention as a prominent, if modest and incremental in capabilities, indicator of how China will use its growing power. As Major General Qian Lihua declared in November 2008, “The question is not whether you have an aircraft carrier, but what you do with your aircraft carrier.”
Encouragingly, China’s MND lists developing “Far Seas cooperation” and capabilities to address non-traditional security threats as missions for the Liaoning. At the same time, however, it mentions safeguarding national sovereignty as another mission—presumably to address territorial and maritime disputes closer to home.
Despite a statement by Chinese National Defense University Professor and PLA officer Li Daguang that the timing of the Liaoning’s commissioning was designed to demonstrate resolve regarding the Senkaku/Diaoyu islands dispute, for the foreseeable future the vessel cannot pose a direct threat to U.S. or Japanese forces. Yet, even in this modest form, it already worries its smaller South China Sea neighbors. Vietnam, in particular, has reason for concern: It lost skirmishes with Chinese naval forces over disputed islands in 1974 and 1988, even though those forces lacked significant air support. With a vulnerable land border and no U.S. alliance, Hanoi could even conceivably be at risk of suffering defeat in a third clash as it vigorously pursues island and maritime claims vis-à-vis China—this time against a Chinese navy with undeniable airpower from land, and eventually from sea.
China won the Johnson South Reef Skirmish of 14 March 1988, but quickly retreated for fear of Vietnamese air strikes and Soviet retaliation. Rear Admiral Chen Weiwen (PLAN, ret.), commanded the PLAN’s three-frigate force in the conflict with initiative that was temporarily controversial but now widely acclaimed.
In a 2011 interview with Modern Ships, Admiral Chen, who served as a commander in a 1988 conflict with Vietnamese forces in the Spratly Islands, emphasized the difference that an aircraft carrier could make. China had won the battle, but quickly withdrew:


During the Spratly Sea Battle, the thing we feared most was not Vietnam’s surface vessels, but rather their aircraft. At that time, Vietnam had Su-22 fighter aircraft, which had a definite ability to attack ships. The Spratlys are very far from Sanya, and at that time we also lacked airfields in the Paracels. Flying from the nearest airfield, Lingshui [on Hainan Island], our aircraft only had loiter time of 4-5 minutes; in such a short time, they could not solve problems before they had to return, or they would run out of fuel. So we felt deeply that China must have an aircraft carrier: If during the Johnson South Reef Skirmish, we had our own [air] cover from a nearby aircraft carrier, we would simply not have had to fear Vietnam’s air force. Now that the Spratlys have airfields, it is much more convenient. If China’s aircraft carrier enters service relatively soon, and training is well-established, this will solve a major problem. We will seize air superiority; Vietnamese aircraft will not dare to take off.

The idea of using deck aviation to address China’s sovereignty claims is hardly Admiral Chen’s alone. According to “Science of Campaigns,” an authoritative volume written by scholars at China’s National Defense University, carriers can play a crucial role by providing air cover beyond the range of land-based air to support long-range amphibious landing operations against small islands: “Combat in the deep-sea island and reef region is relatively more independent, without support from the land-based force and air force. Under this situation, an aircraft carrier is even more important in winning victory in the campaign.” In a recent interview, Sr. Capt. Li Jie, an expert at the PLAN’s strategic think tank, was quoted as stating that “China’s first aircraft carrier…will play an important role in China’s settlement of islands disputes and defense of its maritime rights and interests.”
Looming Large and Making Waves?
So how might Liaoning ultimately influence Chinese naval operations and future naval procurement? The answers to this question will substantially shape other countries’ views concerning the strategic course China takes.
China’s maritime neighbors in Southeast Asia, as well as Japan, India, South Korea, Russia, Australia and the U.S. will pay especially close attention. With Liaoning officially in the fleet, the next questions that China’s military and civilian leaders must grapple with are, first, how to use the ship; second, how many more carriers to build; and third, how to protect it from the increasingly capable anti-ship weapons being acquired by neighbors such as Vietnam, which is due to take delivery of its first Russian Kilo-class diesel attack submarine by the end of 2012. The Liaoning’s existence will likely impel China to develop more advanced surface combatants and anti-submarine forces to protect the symbolically valuable, but operationally vulnerable, asset.
At present, the Liaoning remains first and foremost an emblem of future Chinese sea power. All of its 10 sea trials to date have occurred well within Chinese waters. Chinese naval aircraft have not achieved the basic milestone of landing on its deck with the help of arrestor wires, or “traps,” a process that their American counterparts have been perfecting for decades.
Yet, while the Liaoning’s capabilities will remain modest for the foreseeable future, it will be watched carefully as an important symbol of Beijing’s intentions. As Rear Admiral Yang Yi wrote in a commentary published immediately after the commissioning was made public: “In order to counterbalance the theory that its new aircraft carrier is a threat, China must not only continue to make clear its strategies and policies, it must also take practical actions to convince the world that with the development of China’s military strength, especially the strengthening of its overseas projection capability, it will enhance its role as a defender of regional stability and world peace.”
[CORRECTION: Dalian is a port city located in Liaoning province. An earlier version of this column mistakenly described it as the capital of Liaoning. The capital of Liaoning is Shenyang. Thanks to a reader for pointing out the error.]

Andrew Erickson is a professor at the U.S. Naval War College and a research associate at Harvard’s Fairbank Center. Co-founder of China SignPost (洞察中国), he blogs at www.andrewerickson.com.

Posted by Coatepeque at 9:47 AM

I am curious about what the blacked out part is on the Carrier. If you look at the full ship photo on the edge of the angled deck there is a section with a black rectangle on the edge.

That is the back side of the landing signal lights.

Ya I realized that after I looked at other photos of the Liaoning That I have looked at before. Thanks though

ArmyCO said...
This comment has been removed by the author.
11:38 PM