Liaoning in Sanya, an Oped from China. 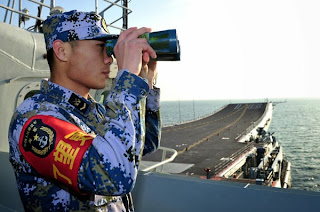 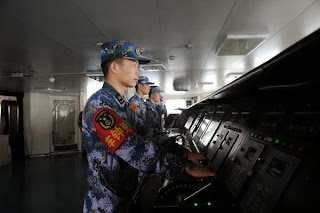 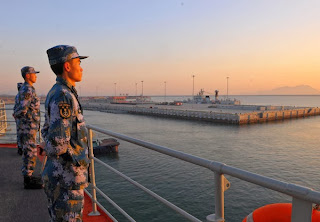 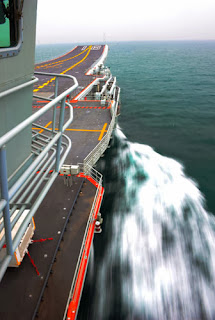 Liaoning arrives in Hainan for mission


A solider carries out his duties aboard China's aircraft carrier, the Liaoning. The vessel arrived in Sanya, Hainan province, on Friday.

China's sole aircraft carrier anchored for the first time in the country's southernmost province of Hainan on Friday, in a move analysts said greatly enhances the Chinese navy's combat capability in the South China Sea.

The Liaoning will conduct tests and training after anchoring at a naval port in Sanya, a PLA Daily website said.

The website said the large harbor at Sanya was designed and built by the Chinese navy and has the facilities to dock a variety of large vessels.

Zhang Junshe, deputy director of the Naval Military Studies Research Institute, said, "With the harbor built at Sanya, China has greatly expanded the range of its carrier in the South China Sea."

He said the voyage to Sanya will help the Liaoning's crew to get accustomed to the vessel's second base, where conditions such as the water temperature and depth are quite different to those in Qingdao, Shandong province, its home port.

Aside from Qingdao, the headquarters of the North China Sea Fleet, and the carrier base in Sanya, the Liaoning has only docked at the Dalian shipyard where it was built.

Before reaching Sanya, the vessels operated at high speed, day and night, in the Yellow Sea and East China Sea and passed through the Taiwan Straits on Thursday.

It is the first time the carrier has embarked on a cross-sea training voyage since being commissioned into the People's Liberation Army navy last year.

The carrier's captain, Zhang Zheng, has said that tests in the South China Sea will pave the way for future missions.

Although the Liaoning did not pass near the Diaoyu Islands, where tensions are running high between China and Japan, the United States and Japan sent warships to follow the Chinese vessel closely.

Defense Ministry spokesman Yang Yujun said on Thursday the Liaoning's mission in the South China Sea is not targeted at any country.

Yin Zhuo, director of the Chinese Navy Information Expert Committee, said the South China Sea is an ideal area for the carrier's training mission and for its escort group.

A voyage of at least several weeks and up to two months in heavy seas will be crucial for a comprehensive test of the carrier's equipment, he said.

Zhang Junshe said it is understandable that the US and Japan have paid great attention to China's new carrier, but they need to get used to its existence.

Li Jie, a senior researcher at the Naval Military Studies Research Institute, said the US and Japan have exaggerated the combat capability of the Liaoning for their own purposes, such as expanding their naval forces.

"To tell the truth, the Liaoning lags far behind the 10 Nimitz-class aircraft carriers in the US. The gap will widen when the USS Gerald R. Ford begins service in 2016," Li said.

He added that it does not make sense for Washington to be nervous about the Liaoning's "normal" training voyage, as the US has highly advanced carriers deployed in the region.

Sanya, the very model of a Socialist Worker's Paradise

"During his tour of Sanya Naval Base in 2008, President Hu gave instructions for naval officers to follow his neo-Confucian concept of "taking people as the foremost" by paying attention to basic-level unit strength and well-being."


I blogged about the Sanya naval base on March 23, (here) and today New York Time also has a similar write up. 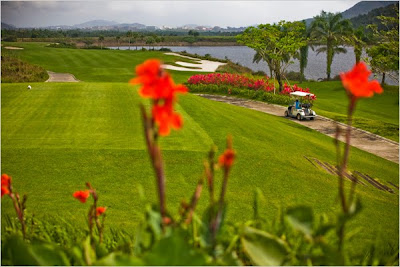 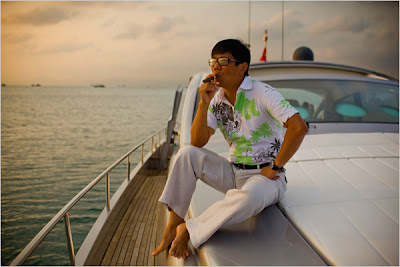 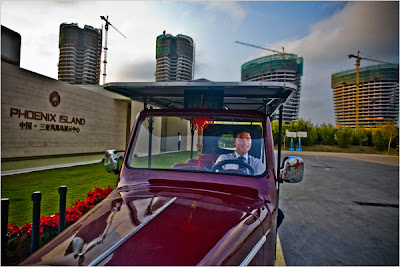 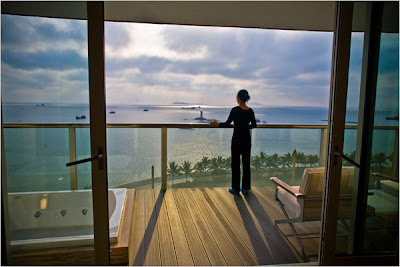 March 30, 2010
On China’s Hainan Island, the Boom Is Deafening
By EDWARD WONG

SANYA, China — One developer is building what he calls Asia’s largest hotel, with space for a casino and a greyhound racetrack.

The Visun Royal Yacht Club, China’s largest, plans to buy a helicopter for the use of its members. A golf course that charges $180 per round is opening 220 villas, each with its own butler, swimming pool and spa — “I want to get it into the Guinness Book of World Records for the most spas anywhere,” the manager says.

Then there are the property speculators flying to this resort town from across China with bagfuls of cash, to buy apartments whose cost per square foot rivals parts of Manhattan. Five-star hotels during the recent Lunar New Year holiday charged $1,500 or more per night; one company charged $80 just to camp out in a tent.

In the last two months, Hainan, an island the size of Belgium in the South China Sea, has become a potent symbol of China’s economic vitality — or, perhaps, its excesses. Even in a country where new wealth spawns new tales of luxury living every day, Hainan is viewed with a mix of awe, envy and disgust.

The boom here, unfolding as much of the world grapples with a recession, is fueled by a first-of-its-kind edict from the nation’s top leaders: On Dec. 31, the State Council, the Chinese cabinet, issued a memorandum that said Hainan had been designated a “test case” in developing an “internationally competitive tourist destination.”

Investors are interpreting that as a no-holds-barred effort to remake Hainan into the Chinese equivalent of Monaco, Las Vegas and Hawaii. While there is no clear indication that the authorities will permit the introduction of licensed casino gambling, some are betting that Hainan could overtake Macao, the former Portguese colony that is now under Chinese sovereignty, as China’s preferred island of iniquity.

“It’s as if they’ve injected a growth hormone into the economic development here, and people are wondering how it will all turn out,” said Xie Xiangxiang, the head of the Sanya Tourism Association.

The Hainan gold rush is the buzz across China. One American businessman in Beijing, Christopher Reynolds, said a group of Chinese artists told him to invest in Hainan real estate. Chinese couples on dates in Beijing restaurants chatter about it. In February, the average sales price of property in Sanya and Haikou, Hainan’s two main cities, showed a 50 percent increase over the same month last year, five times the national rate, according to the National Bureau of Statistics.

“People are coming with entire bags full of cash,” said Raymond Hau, general manager of the Sun Valley Golf Resort, which is building the 220 luxury villas. “I’ve seen this myself. A man had a bag and unzipped it. Boom. ‘Here’s the deposit,’ he said. ‘I want two apartments.’”

Mr. Hau shook his head. “It’s crazy. It can only happen in China.”

The golf resort is popular with the privileged. The president of Kazakhstan shot a hole in one here. And on a recent afternoon, when an attendant opened the passenger door of a black sport-utility vehicle that had just pulled up, a pile of large-denomination Chinese bills fluttered to the ground.

Billboards across Hainan advertise property for sale in developments with names like Miami and East Bahamas. The face of Zhang Ziyi, one of China’s most popular actresses, is plastered on some of the advertisements. The most prominent development is a series of four luxury apartment towers and a “seven star” hotel on Phoenix Island, a spit of sand off the coast that was created by the provincial government as a cruise ship dock.

The apartments — sweeping sea views, bathtubs on balconies and sofas wrapped in velvet — are being pre-sold for an average of $885 per square foot, comparable to New York prices, said Wu Lei, a spokeswoman for the real estate company.

The hype over Hainan has inspired criticism from many quarters. In an interview, Han Han, China’s most popular blogger, expressed contempt for the investment pouring into the island. Last month, People’s Daily and China Youth Daily, both official newspapers, ran editorials lamenting the rising housing and hotel prices. The editors appeared concerned that the stratospheric prices could highlight, for many Chinese, the growing class divide in this country.

“How can we create a stable and harmonious living environment if the island’s ordinary residents do not have the ability to buy housing?” wrote the editors of People’s Daily.

Even officials in Hainan seem worried. In mid-January, the provincial government announced a temporary halt to new commercial development projects. Gambling is another uncertainty. Some officials have said only modest forms of betting will be allowed, while others say Hainan could push the limits.

At the moment, gambling is banned across China, except in Macao.

The history of Hainan in the 1990s offers a cautionary tale. Early that decade, after the Chinese government had designated Hainan one of the country’s “special economic zones,” property speculators flocked to the island. Some of China’s most successful real estate magnates, including Pan Shiyi of Soho China and Feng Lun of the Vantone Group, made their first fortunes on Hainan. Across China, the island’s freewheeling capitalism became synonymous with corruption. The bubble burst after a few years, and the island stagnated.

Now, in Sanya, even those benefiting from the current boom say property and hotel prices have reached absurd levels. “There’s no real economy,” said Lin Mingkun, the manager of the yacht club and a condo owner. “It’s a bubble economy.”

Some residents say they are being priced out of housing options. On the west side of the yacht marina, there is a neighborhood where more than 1,000 fishermen and family members live in cramped alleyways.

The families have lived here for generations, but local officials and the real estate company that owns the yacht club, Hongzhou Group, are trying to persuade them to move off the land. Four women sitting outside one home said the Hongzhou Group was offering less than $20 a square foot as compensation.

“If we get kicked out, there won’t be a house for the next generation,” said one, Ms. Shi, 48, who agreed to speak on the condition that only her last name be printed.

Mr. Lin said the Hongzhou Group was building an apartment complex across the harbor for the families and would pay them more than $40 per square foot for their property. The fishing boats would be moved into another bay, he said.

The Hongzhou company, with its gleaming Times Coast condominium development by the marina, is in the vanguard of Hainan’s transformation. The yacht club already boasts more than 80 members who have each paid $92,000 for the privilege of parking their boats here for 23 years.

“In China, Sanya will be the leader in luxury leisure,” Wang Dafu, the owner of Hongzhou, said one afternoon while cruising the bay in his 72-foot Pershing yacht.

He puffed on a Cohiba cigar. “The reason you earn money,” he said, “is to spend it.”