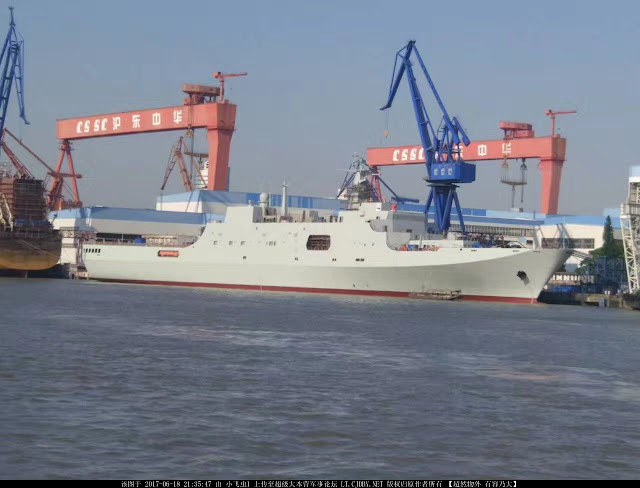 Posted by Coatepeque at 2:28 PM

In 2015, China announced reductions in their military by 300,000 to 2 million, while Russia, India, and the United States continue to pose significant challenges. The implementation of technology continues reduces the quantity of personnel required. Along with the drawdown, China also plans to shift to three People's Liberation Army (PLA) divisions that capable of amphibious operations to the People's Liberation Army-Navy (PLAN). The Chinese shift augments the current 2 Marine Corps Brigades already operating more than mirrors the US capability. China also shifted some amphibious ships the Coast Guard to improve logistic support of dual use civilian-military islands in the South China Sea.

When Qaddafi's regime fell, Chinese evacuated 35860 Chinese nationals from Libya and Chinese firms lost billions in investments. Since, the Chinese government no longer backs Chinese investments wholesale, China must develop the ability to project and effect global force projection in the scale and scope to that of the US and its Navy. In addition to taking part in counter piracy operations off of Yemen since 2009, the PLA has combat battalions conducting UN Peace Keeping operations in South Sudan. In February 2016, China began construction of a naval base in Djibouti, on the Horn of Africa in support of the Chinese military operations in Africa.

China will continue to increasingly project economic power around the world, which requires them to also project military power to protect that commerce.

The PRC will continue to build and increasingly rely on operationally employment of larger hovercraft to provide swift tactical resupply of the PLAN-manned outposts in the SCS. The capabilities of the craft to travel and maneuver at speed with light surface pressure would make interdiction attempts short of armed conflict problematic.
http://foreignbalance.blogspot.com/2017/04/american-need-for-chinas-monroe-doctrine.html
http://foreignbalance.blogspot.com/2017/06/chinese-prc-hovercraft-in-south-china.html