Another good read from Kenneth Allen and Jana Allen.  This article will surely shed some light on the recent PLA/PLAAF re-org, especially on how they would put together a “strategic air force”.


To read the article in its entirety, please visit James Town Foundation (here)

June 9, 2017 09:39 AM Age: 1 day
General Yi Xiaoguang (乙晓光) is an experienced pilot and strategic thinker in the Chinese Air Force who is likely to be tapped as its next Commander

Central Military Commission (CMC) Member and People’s Liberation Army (PLA) Air Force (PLAAF) Commander, General Ma Xiaotian (马晓天), will reach his mandatory retirement age later this year and will likely retire in conjunction with the 19th Party Congress. While much of the PLA’s promotion process remains opaque, transition of the top PLAAF leadership may be becoming more predictable. Ma’s most likely successor is General Yi Xiaoguang (乙晓光), who currently serves as a Deputy Chief of the Joint Staff (formerly General Staff) Department. If appointed, Yi would become the 12th Commander of the PLAAF since it was created in November 1949. If recent precedent is followed, he would likely also receive a grade promotion from Theater Command Leader to CMC Member and serve concurrently as the Deputy Secretary of the PLAAF’s Party Standing Committee. [1]

A review of his background and career progression in comparison with previous PLAAF commanders strongly suggests that Yi is the most logical successor to Ma. Yi has extensive operational and leadership experience and professional military education. He has rapidly risen in grade and rank since 2001 and since 2014 has held key positions that qualify him to serve at the next higher grade. Since 2012, he has also been an alternate member of the Chinese Communist Party (CCP) 18th Party Congress. Additionally, it has already been established that top PLAAF leadership are expected to represent the service to foreign counterparts. [2] Yi is well prepared to fill this role. He is a strategic thinker who has published on a range of technology-related issues, and in contrast with most of his peers, he has broad experience representing the PLAAF overseas as well as hosting foreign military delegations in China. While his career has followed a similar trajectory to other top PLAAF leaders, Yi is representative of the generational and educational change that is occurring within the PLAAF and being pushed to help build a “strategic air force”. 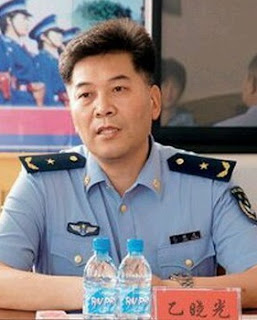 Posted by Coatepeque at 6:46 PM