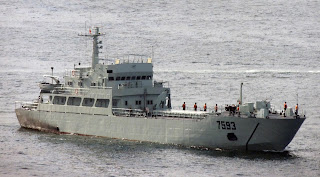 HONGKONG, May 24 (ChinaMil) -- According to the Official Weibo account of PLA Hong Kong Garrison, the officers and sailors assigned to a Navy Ship Group under the PLA Hong Kong Garrison neatly lined up on the eastern wharf to attend a ceremony on May 23. It is the decommissioning ceremony for five ships, including No. 7593, No. 7594 and No. 7595 Landing Ships, as well as Nanjiao 85 and Nanjiao 86 Transporting Ships, which were among the first batch of ships deployed in Hong Kong.

Since their service, the five ships have witnessed the efforts and hard work of all the officers and soldiers stationed in Hong Kong, and recorded all the glory and honours in the past two decades, as the most loyal battle companions.

Records show that the three decommissioned landing ships are Type 074, the medium class landing ships designed by the PLA in the 1990s to replace small landing craft with low speed and poor wind and tide resistance. With the standard displacement of 486 tons and full load displacement of 656 tons, Type 074 has a shallower draft, leading to a maximum speed of 18 knots and an excellent performance of beach flushing. The design of its bow door is convenient for the exit and entrance of tanks, artillery and vehicles, and conducive to increasing speed as well. On the deck, it is equipped with crane, which could be used to handle light cargos.
Posted by Coatepeque at 8:24 PM