Jianghu Class FFG560 in the news.

A Chinese naval frigate has run aground in a disputed area of the South China Sea in an embarrassing twist to the escalating territorial row in the area.

News of the collision came shortly after a summit of south-east Asian foreign ministers broke up without a joint statement for the first time in the 45-year history of the Association of South-east Asian Nations (Asean) because of splits over the complex and increasingly heated maritime dispute.

Huge amounts of cargo traffic pass through the sea, which also boasts rich fisheries and vast energy supplies. The gravest recent tensions have been between China, the Philippines and Vietnam, but Brunei, Malaysia and Taiwan also claim parts of the sea.

A statement on the Chinese ministry of defence's website said a navy frigate had been accidentally grounded near Half Moon Shoal in the South China Sea while carrying out routine patrols on Wednesday night.

There were no casualties and the navy was organising its rescue, added the report, which appeared shortly after the Sydney Morning Herald broke news of the collision. It is unclear how badly the vessel was damaged.

The area is about 60 nautical miles (111km) west of the Philippine province of Palawan in an area claimed by Manila. The Philippines military told Associated Press that the shoal was well within the country's territorial waters.

"We have to hear from them what happened. If it is in distress, we're always ready to provide any assistance," said Brigadier General Elmer Amon, the deputy regional commander.

Rory Medcalf, director of the international security programme at the Lowy Institute, said it was surprising to see the Chinese using naval vessels to patrol the disputed area.

"This raises lots of questions … They have been relying primarily on civilian forces," he said. "That does mean sooner or later we will see confrontational incidents involving naval vessels rather than civilian agencies.

"Secondly, it raises concerns about the quality of seamanship. If this had been a near-run with a ship from another country, it could have ended badly, with political implications."

Ian Storey of the Institute of South-east Asian Studies in Singapore said that while the grounding was in itself unlikely to escalate tensions, it indicated the growing militarisation of the waters. "Resolution of the dispute is even further out of reach," he added. "No one seriously envisages a major conflict in the South China Sea because it's not in anyone's interests. They depend on those sea lanes for the continued functioning of their economies.

"The real risk is that an accidental clash occurs and escalates. In my mind, it is just a matter of time before one of these standoffs gets really ugly and people get killed."

Tensions have been building in the area since 2007, with increasing keenness to claim the energy resources, and growing pressure from nationalists in several of the countries. Vietnam has seen unusual street protests over the dispute in the past few weeks.

"Add to all that the intensified US-China competition, with the Americans supposedly coming back to Asia, and you have all the ingredients for the muddle we have now," added Medcalf. Beijing and Manila have already engaged in a tense standoff at Scarborough Shoal, after the Philippines accused Chinese fishermen of poaching in its exclusive economic zone. China says the area has belonged to it since ancient times. Both sides sent government vessels to the area, although the Philippines has now withdrawn its ships.

Earlier this week, Asean members announced they had agreed a code of conduct governing maritime rights and navigation in the region and procedures for handling disputes. But further talks with China would be required to reach agreement on a legally binding set of rules. China argues that the territorial disputes should be tackled bilaterally, opposing attempts to handle them collectively.

Hillary Clinton and China's foreign minister, Yang Jiechi, sought to strike a more amiable note on the issue as they met in Cambodia on Thursday. But the US secretary of state urged China to open talks on the code, adding: "No nation can fail to be concerned by the increase in tensions, the uptick in confrontational rhetoric, and disagreements over resource exploitation.

"We have seen worrisome instances of economic coercion and the problematic use of military and government vessels in connection with disputes among fishermen."

Speaking of having enough shrimp boats -- South Sea Fleet's FFG 560 Dongguan (Type 053HG, Jianghu V) returns to the fleet after a period of extensive refits. Most visible upgrades included the replacement of its twin 100 mm gun and its old pair triple SY-2 SSM with a modern auto gun mount and a pair improved quad C802 SSM.

Even after this upgrade, it is still not a "modern warship" measured by any standards but it is still capable of performing the less glamorous second line duties such as offshore patrols (here)

At the same time, the FFG 544 Siping (Type 053H2 Jianghu III) is removed from the PLAN's Orbat to become a training ship. It was renamed as Lushun (Port Arthur) On July 28th 2010 becoming the first PLAN ship named after a county. Up till now, all other PLAN ships are named after a city. (here) 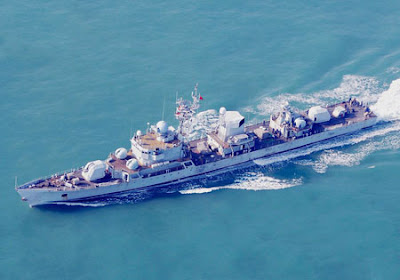 The new adventures of old Jianghu

Recent Internet rumors and photos are suggesting that the old Jianghu I and II are being withdrawn from combat patrols.   Some are them are being sold to Bangladesh and Burma, others have their front pair of 37mm mounts replaced by Heavy MG more suitable for anti-piracy and fishery patrols in the South China Sea.  Other noticeable patrol centric modifications include two SATCOM antennas, new cranes for the rubber dinghies and extra cameras on top of the bridge. 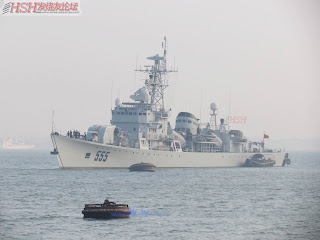 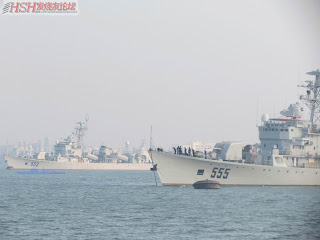 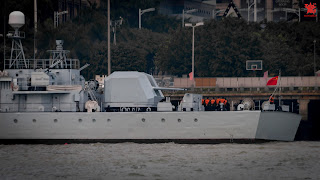 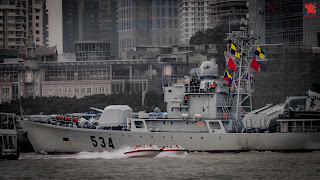 FFG 544, the sole member of the JiangHu IV class -- withdrawn from service in 2010 and has been enjoying her new life as a training ship for the Chinese Naval Academy in Qingdao. 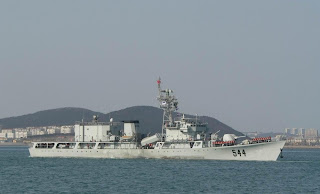 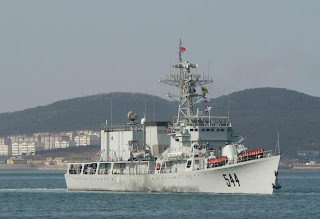 The younger JiangHu Vs are being converted into  SSM trucks. 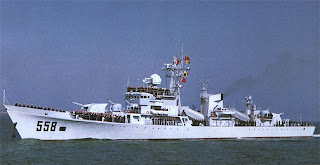 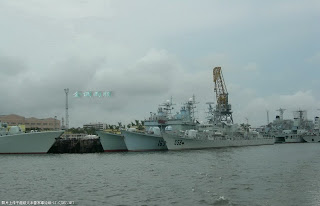 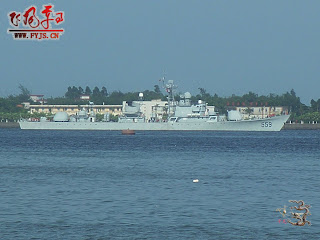 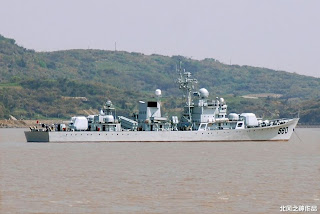 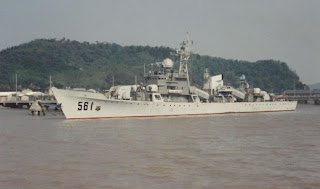 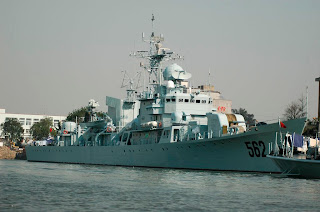 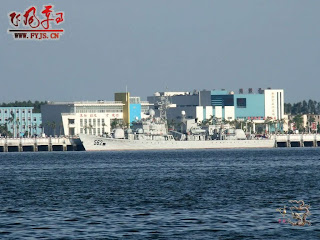 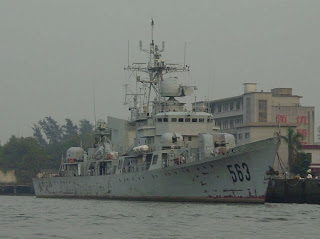 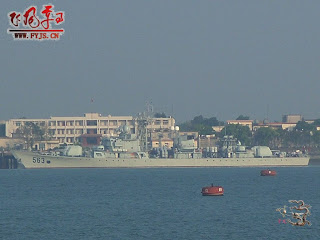