As an air-confrontation drill conducted by an army aviation force under the information-based conditions was unveiled at a place in the south of China’s Yangtze River on the day, June 11 is a day destined to be remembered in the history of the army aviation force of the Chinese People’s Liberation Army (PLA). A PLA army aviation brigade, which was just upgraded from a PLA army aviation regiment, dispatched the PLA’s new-type helicopters for the first time to participate in the actual-troop drill and made its debut by dispatching the PLA’s largest helicopter fleet for emergency combat drill before tens of PLA generals.

The troop unit’s shift from a “pupa” to a “butterfly” is a miniature of the transformation and development of the PLA army aviation force. According to the briefing, after it was put under a group army from an army aviation regiment directly under a military area command in 2003, the brigade initially realized the shift from the support type to the main-battle-assault one in its over-nine-year transformation and development period, becoming the “iron fist in the air” in the joint strikes for victories.

In the summer of last year, a ground-and-air joint combat drill was conducted on the snow-covered plateau, marking that the combat areas of the PLA army aviation force have expanded from plain to plateau. As a result, the PLA army troops possess the capability for launching the air-to-ground precision strike in the high altitude areas.

The “lying on the ground” army troops really begin to fly， said a leader of the Army Aviation Department of the PLA General Staff Headquarters. He added, “The ‘two reductions and two additions’, namely, the establishment of the PLA Army Aviation Force soon after the one-million disarmament in 1985 and the establishment of the PLA Army Aviation Academy after the 500,000 disarmament in 1999, allowed the army aviation force building to take the “express train” of our times. As a result, the army aviation force has gradually developed into a powerful combat force with air-ground integration and air-sea integration capabilities.”

Today, the PLA army aviation force has established its own operation theory systems supported by the 19 monographs, which are developed from scratch and from weak to strong, and its main plane-model development realized the leap from the imported ones to the independent innovation and mass-production ones. 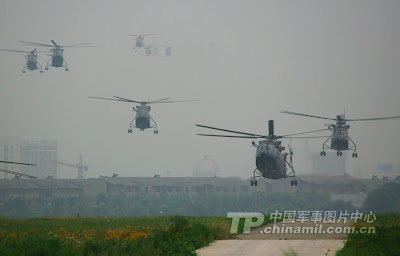 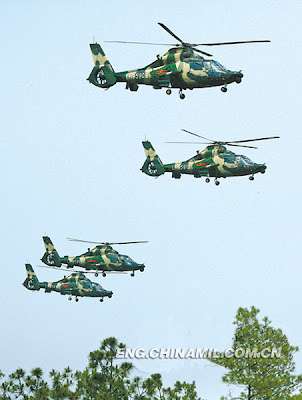 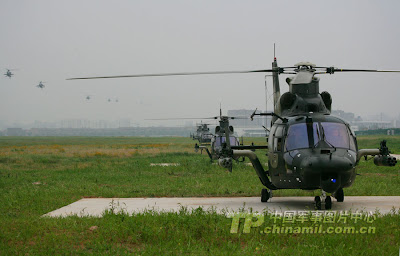 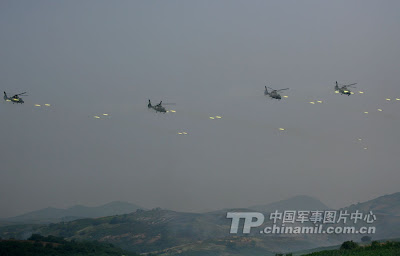 Posted by Coatepeque at 8:05 PM