The CNS Ningde, a Type-056 class corvette, sails in waters off Dalian, Liaoning province, in November. Provided To China Daily

The CNS Ezhou with a hull number of 513 was delivered to the East Sea Fleet in a naval base in East China's Fujian province on Wednesday, PLA Daily reported, saying the ship will perform coastal patrol, fishery escort, anti-submarine and anti-ship operations.

It is the second ship that has been commissioned to the PLA Navy since the start of 2017, following the CNS Kaiyangxing, a Type-815A class electronic reconnaissance ship, which now belongs to the North Sea Fleet. 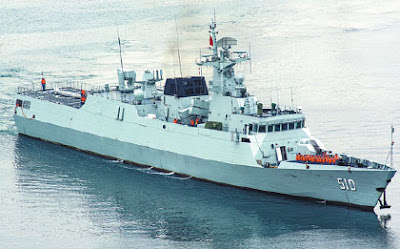 XIAMEN, Jan. 19 (ChinaMil) -- The commissioning ceremony for the guided-missile frigate Ezhou (Hull No. 513) was held at a naval port of the East China Sea Fleet of the PLA Navy in east China’s Fujian province on January 18, 2017.

The Ezhou is a new member of the Type 056 corvettes family of the PLA Navy. It is 89 meters in length and 11.14 meters in width and has a full-load displacement of 1,254 tons.

The Type 056 corvette features excellent drivability, navigability and stealth performance. In the East China Sea fleet, the Ezhou will be used in littoral patrol, fishery protection and escorting, anti-submarine operations and surface operations.

The guided-missile frigate Ezhou is  named after the Ezhou City in central China's Hubei province. 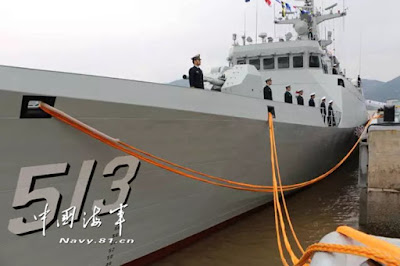