This is where the attack took place.

Sometimes I wish I can teach all those pundits on how to search photos in Chinese. 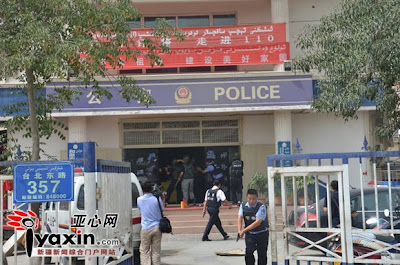 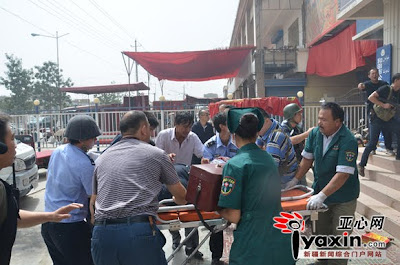 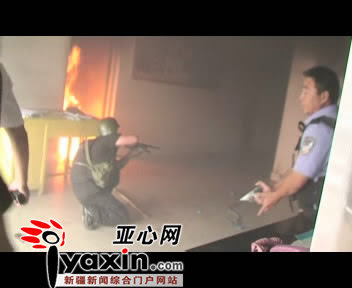 The official, who declined to be named, said the attack left four people dead, including an armed police officer, a security guard, a woman and a teenage girl. At least three others were injured.

Rioters hacked security guard Memet Eli to death while they were trying to break into the Na'erbage police station shortly after 12 pm Monday, said Ablet Metniyaz, chief of the police station.

"He is just 25. He planned to get married in September," said Abliz, an officer of the police station.

In addition to Eli, an armed police and two civilians died in the incident, according to Metniyaz, 38, who has been serving as chief of the police station for three years.

The rioters had taken six civilian people and some police staff hostage, and set fire and smashed things in the police station, leaving damaged computers, printers, furniture and clothes scattered around, Metniyaz said.

Shouting frantic religious slogans like "Allah the only God", the rioters ran to the top floor and police opened fire to stop them, said an anonymous policeman with the police station.

When the attack took place, most of the police station's staff were following Metniyaz to visit local residents in an effort to seek their opinions about safeguarding public security.

The rioters had occupied the police station when Metniyaz led his team back.

"I shouted in Uygur language, asking the rioters to stop doing things that run against the law and to settle disputes in peaceful way. But they kept casting gasoline bottles and rocks to us," said Metniyaz.

"I saw the rioters hacking innocent people, some of them got injuries on their faces, noses and ears."

All the rioters were male aged between 20 to 40. They spoke with non-Hotan accent and wore sneakers -- "probably to prepare for running away," said Metniyaz.

This kind of behaviour is sort of why I find it hard to feel sympathetic one way or the other about situations like this. While I'm sure the Uyghurs have their legitimate grievances, disgusting shit like this is only going to harden the already non-too-empathetic Han attitude towards Uyghurs.

"Sometimes I wish I can teach all those pundits on how to search photos in Chinese.

I hope you're being rhetorical, since you're probably familiar with the glossy jaunt of revolutionary sloganeering. Besides subtlety and irony are probably lost on most pundits.

Take a look at the Cyber Security Network on

Keep up the great work on sharing Chinese security news.

First of all, my condolences to the family of the victims. My joke does not work all the time.