The recent fighting in the Kokang, the only Burmese Chinese feudal state in Burma, has become front and center in China’s foreign policy skill. It is widely known that China has a great interest in Burma’s natural resources and only last week, a South Korean-led consortium signed a 5.6 Billion contract to develop a gas field off Burma's coast (here) to feed China's growing energy appetite. Burma’s location is also important to China’s strategic interest as most of China's shipping travels through the Strait of Malacca and for some, Burma serves as a buffer zone between China and India.

The fact that Kokang was founded by the last Ming Dynasty military house draws a great deal of media attention in China; this is not just a historical footnote, as today more than 10,000 Chinese businessmen and workers earn their living in Kokang where up to 90 percent of shops are Chinese owned (here) . During the 1980s and 90s, Kokang was also the source of most of China's illegal narcotics. As a way to conduct a "War-on-Drugs" the Chinese government offered to purchase Kokang's crops as a way to disincentivize farmers from growing opium. Kokang leaders claimed its territory was "drug free" from 2003 on. Given these special relationships between China and Kokang, the events unfolding in Burma have become headline news with acute coverage by most media sources (here) with an expected nationalistic outburst from the young.

Like previous hostility between the Kokang and the Burmese army (last conflict in Oct 2008) the PLA responded by sending troops. On August 25th, 700 PLA troops were dispatched to the Sino-Burma border to prevent further escalation. The Kokang Army or the Myanmar National Democratic Alliance Army (MNDAA), as it is formally known, is part of an alliance of many minority groups including Kachin Independence Army (KIA), United Wa State Army (UWSA), National Democratic Alliance Army-Eastern Shan State (NDAA) and the Shan State Army (SSA) “North” which fields about 45,000 to 50,000 fighters. So for China a full blown civil war would be "bad for businesses" as Khuensai Jaiyen, director of the exiled Shan Herald Agency for News, puts it. (here) So far China's effort seems to fall short as fighting began today. It will be interesting to see China's next move.


Chinese reports had said close to 10,000 people crossed into Yunnan to escape the fighting. 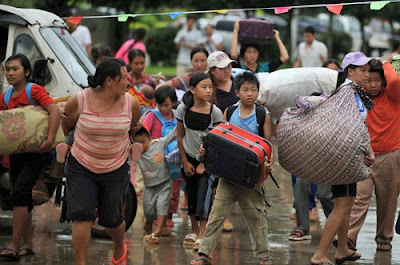 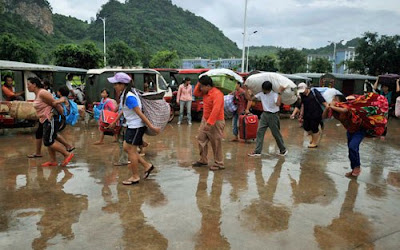 Several minorities living in military-ruled Myanmar's border areas have continued their long struggles for autonomy despite cease-fires with the military regime that seized power in 1988.

Fighters for the Myanmar National Democratic Alliance Army — representing the Kokang minority — on Thursday attacked a police post along the border with China near the town of Laogai, according to the U.S. Campaign for Burma.

The Kachin News Group, an online news agency that covers the Kachin minority in northern Myanmar, also reported the attack as well as several other clashes.

Reports of the fighting could not be independently confirmed.

Tensions between the Kokang and the government have risen recently after the ethnic group defied an order to allow its guerrillas to be incorporated into a border guard force under army command.

The junta plans an election next year, the first since 1990's abortive polls, the result of which were ignored by the military when the National League for Democracy party won by a landslide. The military has been anxious to assure stability ahead of the vote.

On Wednesday, Myanmar ethnic groups and Chinese media reported that thousands of people fled into China this month after tensions flared between the Kokang and government.

Some 10,000 left the Kokang area in Myanmar's northeastern Shan state between Aug. 7 and Aug. 12 after a military confrontation, The Chongqing Evening Post reported.

The trigger for the confrontation was an Aug. 8 raid on the home of Kokang leader Peng Jiashen — also known as Phon Kyar Shin — ostensibly to look for illegal drugs.

Peng's troops in the Myanmar Nationalities Democratic Alliance Army began mobilizing, but were forced out of Laogai on Tuesday by government soldiers and members of a breakaway Kokang faction.

According to the U.S. Campaign for Burma, Peng issued a statement Thursday calling for talks with the government and for newly deployed troops to withdraw from the area.