The divisions that are taking part on the Kuayue-2009 tactical military exercise are identified as:

(thanks oneattheback for the tip)

As others have noted before -- all the "Taiwan units" are missing from this important exercise. However, it does not mean that they are seating on idle either, for example, members of 127th Mech Infantry Division is doing their ritual of "million-man swim" in the Yellow Sea right now. 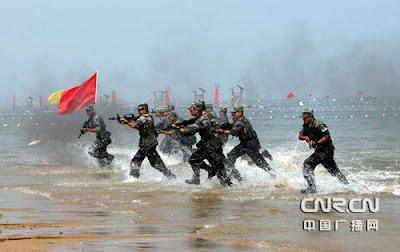 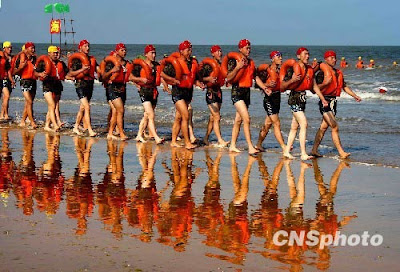 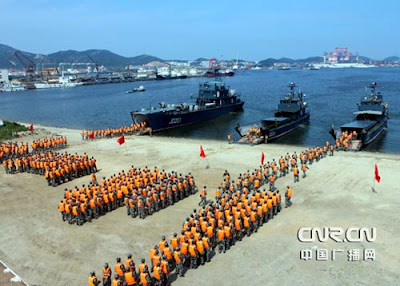 Here is a surprisingly detailed write-up about the Kuayue 2009 from the PLAdaily.

The first large-scale “Stride 2009” series trans-command actual-troop test-oriented exercise ever since the founding of the Chinese People’s Liberation Army (PLA) kicked off on August 11.

According to the preplan, from August to September, four army divisions respectively under the Shenyang Military Area Command (MAC), the Lanzhou MAC, the Jinan MAC and the Guangzhou MAC will move to the combined tactics training base out of their own theaters under the uniform deployment of the General Staff Headquarters (GSH) of the PLA to confront with the “enemy” in unfamiliar areas.

The whole process of the exercise will be fairly and authentically recorded and judged through a set of “ground force exercise evaluation system”.

According to the plan, more than 80% of the participating troops and large weapons, equipment and vehicles will be transported to the destination by two maneuver ways, namely, motorized march and railway transportation.

The biggest difference between this exercise and the previous ones is that during the maneuver, besides taking transport aircraft of the PLA Air Force, the GSH of the PLA will coordinate to mobilize and requisition a number of civil airliners and cargo aircraft from relevant airline companies. This is the first time to do so in the exercise history of the PLA. In the aspect of railway transportation, all troops will be carried by passenger carriages and heavy weapons will be transported by flat bed trailers. The high-speed and nonstop “Hexie” MUs will also be used to transport light gear troops.

The combination reflecting combat strength and the diversity of combat means

In addition to a small number of rear personnel, the average number of each of the four infantry division participating in the military exercise is about 10,000 persons, which means that each division has mobilized more than 80% of its total force strength, and the maximum exercise participation rate is as high as 97%.

To reflect the combination of the combat strength and the diversity of combat means, the special operation units, army aviation troops, electronic warfare companies, photographic reconnaissance platoons, unmanned plane groups, and short-wave interference stations will be distributed to the exercise troops with new-type equipment to augment the overall combat strength.

A batch of independently developed new types of weapons and equipment will be used in the exercise fields to test the efficacy. For example, whether the strong sound broadcasting vehicle used by the psychological warfare unit can play the role of “destroying the arrogance of the enemy and enhancing the spirit of the fighting troops” in the exercise remains to be seen.

During the “Stride 2009” series exercise, after the participating troops enter the training base, the “Red Army” and the “Blue Army” will use laser to simulate fighting equipment to stage a confrontation.

In recent years, the PLA has increased the momentum of research and development on simulated fighting weapons, and regarded them as the important exercise equipment for the base confrontation exercise. According to relevant sources, in the next few years, the equipping scope and variety of simulated fighting weapons will be enlarged, in a bid to enhance the difficulty of the confrontation exercise. The “ground force exercise evaluation system” independently developed by the PLA can enable the directing group of the exercise to make timely, objective and accurate evaluation on the disposal means, damage effects and other exercise effects. It also makes the simulated confrontation with more practical significance.

Almost all war-related issues are the assessment items of the “Stride 2009” series exercise.

All the ways and means that each troop unit will use to solve such issues as refuel of automobiles, supply of 10,000-odd people’s consumption of goods and materials, gathering of personnel and vehicles left behind, treatment of the sick and wounded, compensation of damaged crops of the farmers, will be put on record and the record will be used as a basis for final comment.

During the maneuver process, the participating troops will rely on the military-civilian gas stations to set up POL and goods supply depots. The military hospital near the exercise area will be responsible for the medical support for the officers and men participating in the exercise temporarily. At the same time, the hospital subordinated to each division will provide accompanied medical support. The individual first-aid items and battlefield first aid kit and others will also be distributed to the soldiers and troops ahead of time.