The PLAN followed the time honored Chinese tradition of “let no miles go to waste," as the second flotilla visited Pakistan, India, Indonesia, and Malaysia after conducting a joint patrol with the USN on their “way home” from its pirate fighting venture in the Gulf of Aden. Perhaps this is what James Holmes and Toshi Yoshihara were referring to as “Soft Power At Sea” in their works (here) and (here).

Holmes and Yoshihara have made some convincing arguments in their analyses of the PRC’s soft power approach toward ASEAN nations. However, the idea that the lack of "hard power" in Southeast Asia has forced Beijing to utilize "soft power" as a stopgap ignores Beijing’s comprehensive relations with ASEAN -- not only has there been cultural exchanges, but the creation of free trade zones, liberalized weapons trade (for example, the C802 SSM is in service with a number of ASEAN’s navies), and participation in joint military exercises. The PLA also deployed small teams to Thailand in mine cleaning operations from 2002 and 2003 (here). Having a strong navy that can fight off pirates does not hurt either. In some way, Beijing’s approach to ASEAN is similar to the index of Comprehensive National Power (CNP) which incorporates the use of both "hard" and "soft" power.

Holmes and Yoshihara quote Nye that soft power is arises from the attractiveness of a country’s “culture, political ideals, and policies," but for the Chinese government, it seems the primary attractiveness of its soft power is hard currency (i.e. $$$). The current economic downturn shows just how powerful hard currency translates into PRC influence on ASEAN nations. (here)

Case in point: the Sino-Australian relationship is at its lowest point due to many factors (e.g. Rio Tinto), however, they continue their free trade zone talks (here) and recently, signed a 40 billion USD gas deal off the west coast. (here)

"Soft Power" has an inherited limit as Holmes and Yoshihara pointed out; there will be no danger of Australia adopting a “Beijing Consensus” no matter how strong China's "soft power" will become. Besides, Beijing would rather export manufactured goods than some make-believe consensus. 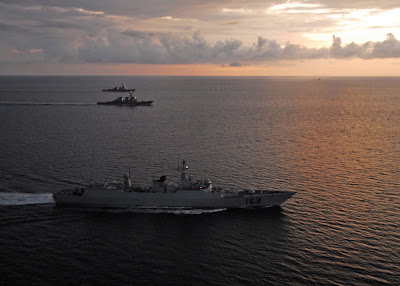 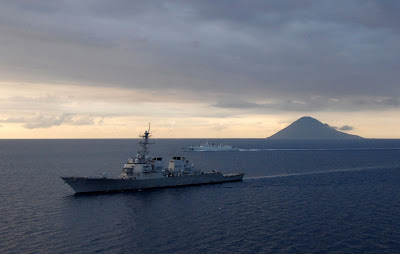 After wrapping up the goodwill visit to Indonesia, the “Guangzhou” warship of the Chinese PLA Navy left Manado, Indonesia at 19:00 on August 19 and started to return home. On its way back, it staged vessel formation movement exercise and communication drill with the Burke class destroyers USS Fitzgerald and USS McCampbell in a sea area to the north of Manado. The two sides also conducted light signal drill at the same time.

At 15:00 on August 20, the “Guangzhou” warship staged a formation movement exercise with the missile frigate Kedah of the Malaysian Navy in the Sulawesi Sea.

By Mo Xiaoliang and Zhong Jijun

Posted by Coatepeque at 4:37 PM

Are those exercises which you mentioned and the visit to Indonesia the same event called Sail Bunaken 2009?