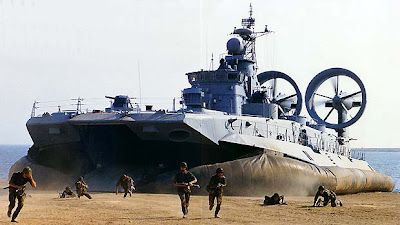 Back in 2006, the rumor of a possible Zubr Hovercraft sale to China had caused a firestorm in the PLA watching community; speculations were abound on how the induction of such a heavy hovercraft would upset the region's balance of power. (here) However, nothing was materialized.

The same firestorm will string up again with the following news release.

While the Zubr class boasts an impressive pay load and speed, it is handicapped by limited range. (300 n miles at 55 Knots)

A Ukrainian government publication listing state contracts confirmed the order without giving its value. Officials at the Morye shipyard in Feodosia declined comment.

The Zubr hovercraft is designed to carry three tanks, 10 armoured personnel carriers, or as many as 500 troops at speeds exceeding 63 knots.

The vessel can due to its larger size operate in rougher seas than smaller hovercraft.

The Russian, Ukrainian, and Greek navies currently operate the Zubr, with a total ten hovercraft produced since 1988.

China's navy currently lacks heavy capacity hovercraft of the Zubr type. The most modern Chinese naval hovercraft in operation, the Jingsah II, has a maximum capacity of 70 troops.

The Zubr hovercraft's capacity to deliver substantial combat forces by water at speeds doubling conventional landing ships would, once in Chinese inventory, complicate defence planning for South China Sea nations particularly Taiwan, according to the report.

China in 2006 was in talks with Almaz on the purchase of six Zubr hovercraft without result.

Posted by Coatepeque at 4:31 PM