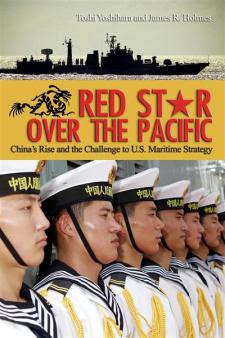 Red Star over the Pacific: China's Rise and the Challenge to U.S. Maritime Strategy by Toshi Yoshihara and James R. Holmes.

Both authors are noted professors at the US Naval War College and this book is a surprisingly refreshing read. It is not a "bean counting" book that recites weapon performance and their numbers, nor does it cherry-pick China related incidents to argue one's political agenda like many recent China related books. Bean-counting and bias are fine in that they serve a purpose, but for those who are looking for a more in-depth analysis, "Red Star Over the Pacific" is a welcome addition.

During the first part of the book, the authors surveyed the current strategic debate regarding China under the framework of Mahanian theory (coined by Alfred Thayer Mahan). Mahanian debates can become heated when competing schools of thought--ranging from Neo-Mahanian, to classical Mahanian to Continentalists--exchange intellectual salvos with their associated think-tanks and journals.

While the authors correctly conclude that there is no single dominant school that governs China's maritime strategy they do put forth a more thoughtful analysis on the direction China's future maritime strategy. After reviewing the debate inside of China, the authors also called for Western PLA watchers to take a fresh perspective with statements like: "not so long ago, western mariners and scholars deprecated Chinese naval power;" "(they need) to revise their once-mocking estimate" and "old thinking about Chinese Sea Power." The author made a strong argument that a fresh perspective is needed on a regular basis as the development of the Chinese sea power is progressing at an amazing speed.

As history is a guide, the book examines the German and Japanese precedent for China's quest for Sea Power, in addition to Mao and Zheng He's continuing influence in the strategy domain. The authors explain that the German and Japanese (and to some extent the Soviet) models seem to match the Chinese experience on the surface, but China is not adopting them wholeheartedly.

In the thick of the book the authors spell out the current Chinese concept (subject to author interpretation) of Fleet Tactics, Missile and Anti-missile interaction at sea, A2/AD, and China's emerging undersea nuclear deterrent. The authors focused on where the PLAN would operate their limited underwater nuclear assets instead of simply pointing out what their inventory is likely to be. This is a very insightful analysis considering the recent news of a newly modified Yuan class, as it offers a framework into the PLAN's operational pattern.

The tail end of the book reviews different strategic schools on China's Soft-Power at Sea, especially in light of Zheng He's historical narrative, and the current economic interest in guaranteeing free passage for China's trade. All these elements are part of what the author’s call China’s maritime identity.

"Security is about more than tallying up numbers and capabilities. Those scholars' insights make a useful way to evaluate China's maritime identity." Page 154.

After reviewing the book, I believe Mahan's first trident of commerce, politics and military power will still "command the barrel of the gun" -- to continue author's attempt of fusing Mao and Mahan.

Simply put, China's current "influence" is the direct result of its economic power; other aspects of Chinese strength seem less relevant. Besides Vietnam, no member of ASEAN will rush into a Chinese style of authoritarianism, no matter how attractive Chinese growth is. Oddly enough, Vietnam is the only country that modeled its political and economic systems after China yet is the most anti-Chinese of the ASEAN block (one of the few ASEAN nations that do not operate the Chinese C-801 anti-ship missile). The recent Sino-Japanese dispute, while distasteful, did not alter the course of general economic integration of both nations (rare earth elements not withstanding).

Without a large chain of bases overseas, Chinese investments will continue to branch out, from Special Economic Zones in Egypt, Ports in Greece, railroad infrastructure in South America, farms in Africa, just to name a few. The greatest constraint for China's naval expansion is not the 1st island chain, nor the second. It is the deep pocket of the defense budget, a budget which is linked to the well-being of the trade-dependent economy. For that, the subscribers of Mahan's first trident are likely to prevail over the third trident (military force) in establishing a regional pecking order. At the end of the day, without oversea bases, it is difficult to imagine China replacing the USN as the guardian of the high-seas. The PLA high command might not admit it, but they should be thankful they do not have a “guardian” role.

It might be beyond scope of this book, but geopolitical developments in the Pacific can be tiring to the internal politics of member nations (ASEAN +3) and it can have a great impact on the regional security framework in unexpected ways.
Posted by Coatepeque at 8:48 AM