This new class of maritime surveillance patrol ship has a 1317 tons displacement and a crew of 43. Its twin-engine is rated at 2380 kilowatts each capable of pushing it to the top speed to 20.6 knots. Range is reported to be 5000 KM within a 30-days patrol. 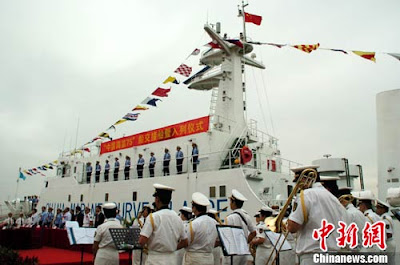 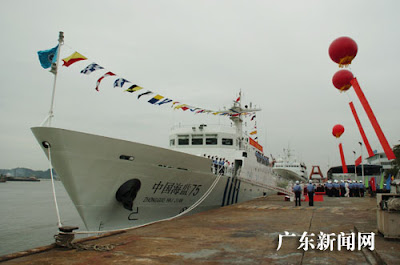 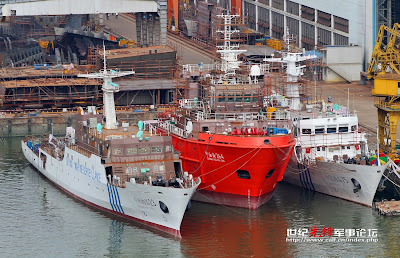 China boosts maritime surveillance fleet amid disputes
A Japanese coast guard vessel (top) and a Chinese fisheries patrol vessel near near the disputed islands in the East China Sea, known as the Senkaku isles in Japan, Diaoyu in China - 28 September 2010 China says it needs more vessels to patrol the seas around the country

China is expanding its fleet of naval surveillance ships amid maritime disputes with several neighbouring countries, state media have reported.

A new high-speed inspection ship was launched this week and 36 more would be added later, an official said.

China needed the ships to better protect its maritime rights, another official was quoted as saying.

Japan and China are locked in their worst dispute in years over a naval collision near islands both claim.


The islands in the East China Sea, known in Japan as Senkaku and in China as Diaoyu, are controlled by Japan, but claimed by China.

The dispute began when a Chinese trawler captain was arrested near the islands by Japan's coastguard in early September after colliding with two Japanese patrol boats.

The row has sparked nationalist protests in both countries. China has sent fisheries patrol vessels to the islands while reports in Japan say Tokyo plans to add six submarines to its navy.

The islands are uninhabited but surrounded by rich fishing grounds and potentially significant oil and gas reserves.

Other disputed island chains include the Spratly and Paracel islands in the South China Sea, which are claimed by China as well as Vietnam, the Philippines, Malaysia, Taiwan and Brunei.