Office of the Press Secretary
For Immediate Release
October 08, 2010
Letter from the President Regarding an Export Waiver for China

Pursuant to the authority vested in me by section 902(b)(2) of the Foreign Relations Authorization Act, Fiscal Years 1990 and 1991 (Public Law 101-246)(the "Act"), and as President of the United States, I hereby report to the Congress that it is in the national interest of the United States to terminate the suspensions under section 902(a)(3) of the Act with respect to the issuance of temporary munitions export licenses for exports to the People's Republic of China insofar as such restrictions pertain to the C-130 cargo aircraft to be used in oil spill response operations at sea. License requirements remain in place for these exports and require review and approval on a case-by-case basis by the United States Government.

What timing -- five days ago, I blogged the following:

There were the Lockheed-Martin L-100 (Civilian version of the famous C-130 Hercules) airlifting cargos around China. Three were imported by the CAAC during the Sino-US "honey moon" years of late 1980s. After 13 years of service, they were decommissioned in 2001. 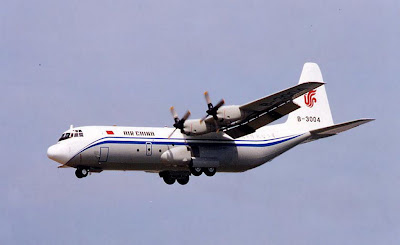 I wonder if this a good or bad sign for the Y-9 project?

Maybe the White House saw ur blog ans thought "Oh what the hell we need from cash from those Chinamen anyways..." =P

I just can't see any "non-political" reasons to procure C-130. But, with Gate's pending visit at later this year, who knows.