I finally have a chance to review some of the news related to J-10B this weekend and saw the following:

he said the agreement between Pakistan and China for the delivery of High Tech aircraft J-10 was intact and these aircraft after improving them further would be delivered to PAF in 2014-15. He said these aircraft are being modernized in accordance with the PAF’s requirements and delivered under the title of FC-20

At first, I did not pay much attention to it, consider all Chinese birds in PAF service had minor modifications. However, by looking at the timing of the news release and the push-backed delivery date, Pakistan might have decided to wait for the improved model instead of the current production one.

Here is the full article:

ISLAMABAD: With singing of an agreement between Pakistan Air Force and Chinese firm CATIC the serial production of JF-17 (Thunder) aircraft would start soon. The agreement between PAF and CATIC on the basis of “seller’s credit” was reached at a ceremony held here Saturday, whereby 42 fighter jets would be jointly produced for the use of PAF.

The agreement was signed on behalf of PAF by Chairman Pakistan Aeronautical Complex Air Marshal Khalid Chaudary and President CATIC MA Zhiping which was witnessed by Chief of the Air Staff PAF Air Chief Marshal Tanvir Mahmood Ahmed and Ambassador of China to Pakistan Luo Zhaohui besides other senior officials from both the parties.

Under the agreement the lot of 42 aircraft would be co-manufactured by China and Pakistan and later these would be inducted in the PAF’s fleet.

Talking to media, Air Chief Marshal Tanvir Mehmood Ahmed congratulated the peoples and governments of Pakistan and China on conduction of successful tests and trails of the most modern aircraft of its class and signing of agreement for start of their serial production. He said “despite all odds we have been successful to reach the stage of starting serial production of the aircraft.”

“In the beginning we will produce 15 aircraft annually and their number will increase to 30 in a year this programme will be carried out in phases,” he said. He said first squadron of these highest quality fighter jets would be inducted in the PAF’s fleet by mid of this year as PAF has already been using 8 jointly produced aircraft for the last couple of years. This fleet would be raised in Peshawar, he added.

About the delivery of AWACS system to Pakistan, he said that agreement had already been reached with a Chinese firm which would start its delivery by 2010. On the delivery of first AWACS system Pakistan would pay 10% cost of the aircraft while the rest would be paid on easy installments basis, he said.
Answering a question, he said the agreement between Pakistan and China for the delivery of High Tech aircraft J-10 was intact and these aircraft after improving them further would be delivered to PAF in 2014-15. He said these aircraft are being modernized in accordance with the PAF’s requirements and delivered under the title of FC-20.


Here is a modified F-7FS served as a prototype for DSI testing. 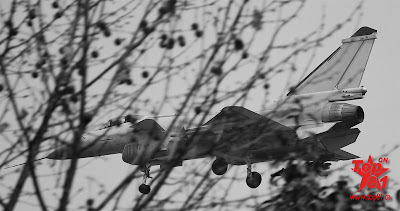 Today’s attack on Lahore is not Islam, Islam teach us humility, love and compassion for fellow human beings, Islam tell us to respect, women, elder and anything which is beneficial to humans even when at war. Let’s call these people what they are, they are our fascists who want a totalitarian version of their own perverted view of Islam to subjugate the free people of Pakistan.