Turkey, the only NATO nation with a large Chinese arsenal in its military has called to raise military cooperation, they also jointly market their rockets and some of those rockets were battle tested against PKK guerrillas in northern Iraq in late 2007. I am surprise to see all those exchanges did not rise too much of a concern in Washington and elsewhere. Maybe, just maybe, there is a benefit being a member of NATO, if Iran would get its hands on a B611, oh boy. 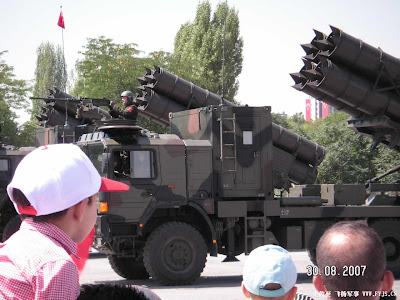 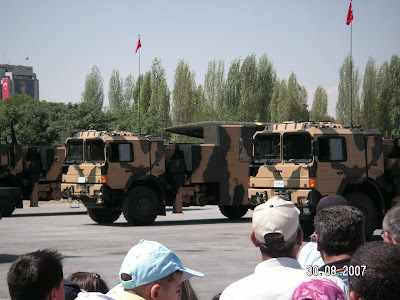 WASHINGTON — China and Turkey have completed development of the B-611 rocket, a secret effort to supply artillery-based rockets to both countries as well as client states, particularly in the Middle East.
"We also have to consider a gray area, in which a couple of Chinese companies are now marketing artillery rockets that border on the edge of short-range ballistic missiles," said Richard Fischer, a leading U.S. expert on China's military. "The B-611 was developed in cooperation with Turkey, the WS-2."

The WS-2 is a Chinese rocket with a range of up to 180 kilometers. It is a variant of the Soviet-origin Frog-7. The B-611, with a range of 150 kilometers, was first displayed at China's International Aviation and Space Exhibition in 2004.

The B-611 does not violate any weapons-control regime. It has many of the properties of a guided missile and could be used by U.S. adversaries.

"The key advantage is that these are much cheaper to produce," Fischer told the American Enterprise Institute on July 11. "If you could put a terminally guided anti-ship warhead on the B-611, then you have the potential to sell [Venezuelan President] Hugo Chavez something that would give the American Navy something to think about."

Uzi Rubin, regarded as the father of Israel's missile defense program, said commercial off-the-shelf technology and components could be used to convert unguided rockets to accurate ballistic missiles. Rubin, who has written a report on the topic, cited the availability of onboard inertial and satellite navigation systems as well as software.