If China and Japan can work toward on a "maritime liaison mechanism", there is no reason US and China can not do that same. The 2002 ASEAN agreement on South China Sea Declaration on the Conduct could serve as a model.

BEIJING, March 20 (Xinhua) -- Chinese navy ships are expected to visit Japan in 2009, according to a press communique released by the defense departments of China and Japan on Friday.

It also said Liang would visit Japan in 2009 to return Yasukazu's visit to China.

China and Japan would hold defense and security consultations in Tokyo within this year, said the communique.

The two ministers agreed to exchange views on international peacekeeping operations, coping with natural disasters and cracking down on pirates, particularly with regard to information exchanges on operations in the Gulf of Aden off the Somali coast.

The two countries agreed that the Japanese chiefs of staff of maritime, ground and air self-defense forces would visit China respectively in 2009 or at convenient occasions for both.

The communique said China and Japan would continue to discuss building a maritime liaison mechanism, and the second expert group consultation in this regard would be held in the first half of the year.

The two sides agreed to launch dialogues among all services and arms, and between military commands of the Chinese People's Liberation Army (PLA) and armies of Japanese self-defense forces.

The two countries also encouraged exchanges of the field officers and junior military officers, as well as the cooperation between their military institutes. 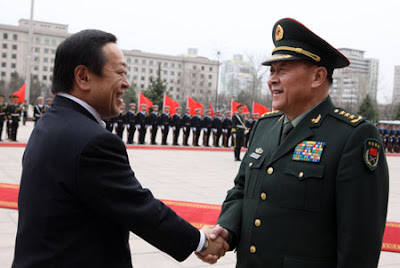