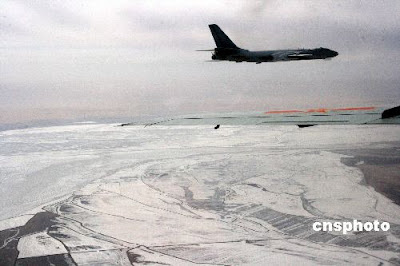 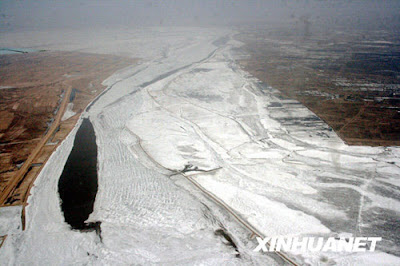 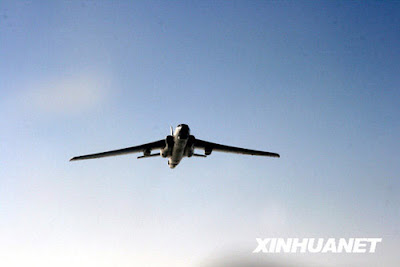 At the request of the government of northern China's Inner Mongolia Autonomous Region, the PLA Air Force (PLAAF) has launched the first air bombing mission to aid the local government in preventing an ice-jam flood in the Yellow River.

HOHHOT, March 8 (Xinhua) -- China is planning to use army forces to prevent flood threat caused by ice blockage on the Yellow River in northern Inner Mongolia Autonomous Region as the river water thaws.

Three air force bombers carried out a trial ice blasting operation Saturday and an artillery unit has been stationed near the banks of the river in the region, said a spokesman for the Inner Mongolia Yellow River Ice Blockage Prevention Headquarters.

The maximum of the river's floodwater in the region has reached1.7 billion cubic meters, surpassing that of last year and posing a severe challenge to flood prevention.

As of Sunday, 204 km of the river's 800-km section in Inner Mongolia has thawed.

Sections of the Yellow River freeze and thaw at different times. When an ice run flows to a frozen section, it can become blocked. If the blockage persists, water levels may rise and cause floods and dam bursts, threatening lives and property. The ice-run phenomenon takes place at the start of winter and spring.

The 5,464-km river, the country's second longest, originates in Qinghai Province in the northwest and flows through Gansu, Ningxia, Inner Mongolia, Shaanxi, Shanxi, Henan and Shandong before emptying into the Bohai Sea.

Posted by Coatepeque at 9:10 PM

Unknown said...
This comment has been removed by the author.
12:35 PM

I think China found a new euphemism for taking a shit
bombing the yellow river.