An update on the PLAN's second task force 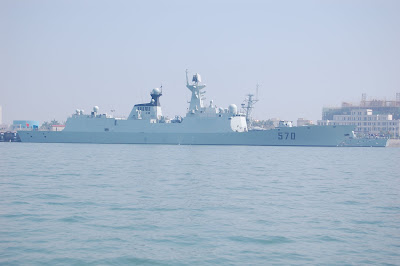 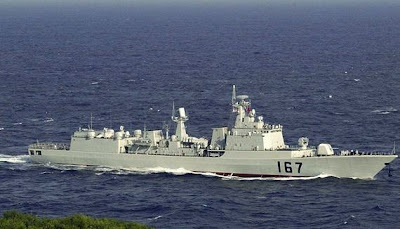 Again, they are sending their latest toys, while DDG 167 is an old hand, FFG 570 is a new Type054A class that was commissioned only two years ago.

ZHANJIANG, Guangdong Province, March 31 (Xinhua) -- A second group of Chinese navy escort ships will set sail for the Gulf of Aden Thursday to replace a flotilla sent earlier to guard against pirates.

The new task force will comprise the destroyer, Shenzhen, and frigate Huangshan, as well as the supply ship, Weishanhu, which served in the first escort mission.

With two helicopters and total crew exceeding 800, including navy special forces, it is mainly tasked with ensuring the safety of Chinese vessels passing through the gulf and waters off Somalia and those of international organizations like the World Food Program shipping humanitarian goods.

The flotilla will traverse 4,600 nautical miles, passing the Xisha and Nansha Islands, the Singapore Strait, the Strait of Malacca and the Indian Ocean before it arrives in the Gulf of Aden.

China initiated its three-ship escort task force on Dec. 26 last year after the United Nations Security Council called on countries to patrol gulf and waters off Somalia, one of the world's busiest marine routes, where surging piracy endangered intercontinental shipping.

About 20 percent of Chinese merchant ships passing through the waters off Somalia were attacked by pirates from January to November in 2008, before the task force was deployed.

A total of seven ships, either owned by China or carrying Chinese cargo and crew, were hijacked.

Tianyu No. 8, a Chinese fishing vessel with 16 Chinese (including one from Taiwan) and eight foreign sailors aboard, was captured by Somali pirates on Nov. 14 last year and released in early February.
Editor: Xiong Tong