What is he saying? Aussie Sailors are bunch of slackers. Not sure I understand.

In the "Peace 09" multinational maritime joint military exercise organized by Pakistani Navy, Cui Yonggang, the deputy captain of the Chinese warship No. 170, stayed onboard the Australian frigate "Varamonga" from March 9 to March 12 as a Chinese naval observer. He was deeply impressed by the Australian Navy's practice of letting serviceman accumulate combat force in an easy atmosphere.

The first impression that the "Varamonga" left on the mind of the visitors is that the ship is full of easy atmosphere everywhere. The sailors don't need to keep tense for a long time no matter on duty or in their spare time.

Long-time work under high pressure is apt to make people collapse. How to alleviate the fatigue, nervousness and sensitivity? The solution of the Australian Navy is to put emphasis on work purpose and standard while giving sailors freedom of doing things other than work. In their spare time, the soldiers can listen to music and have sports activities for refreshment.

During the exercise, once the "Varamonga" launched live firing practice at the floating targets, he found that only operators of the main cannon system stayed at their positions and the other sailors were either at their normal rest or doing their routine work. As no first-class deployment was made, the strength of the officers and men was well maintained. 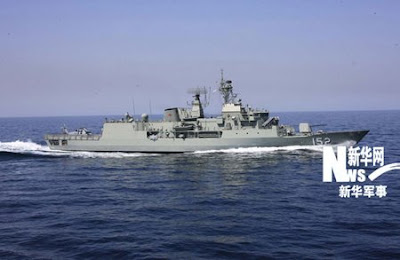