who said General Liang does not have a sense of humor

Off all the people in the world, General Liang has to tell the Japanese Defence Minister about the decision to build an AC carrier. Interesting timing too, consider JMSDF just launched a new class of "destroyer". Now, that is an interesting looking DDG.

Here is a picture of this beautiful looking JMSDF ship. 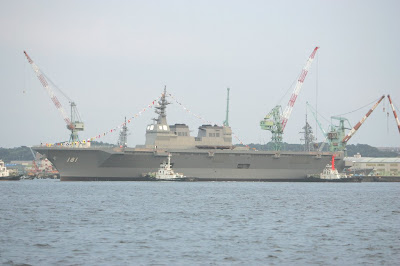 The Hyūga class destroyers are a new type of helicopter destroyer (DDH) being built for the Japanese Maritime Self Defense Force. It is planned to replace the Haruna class destroyers currently in use. The new ships will be the largest combatant ship operated by Japan since the end of the Imperial Japanese Navy. In design it resembles an aircraft carrier or amphibious assault ship.

The class' code-name (16DDH) derives from the Japanese calendar, specifically the 16th year of the Heisei reign (2004), when the provisional title was given.

BEIJING (AFP) — China will not remain the world's only major nation without an aircraft carrier indefinitely, state press Monday cited the nation's defence minister as telling his Japanese counterpart.

Liang Guanglie made the remarks to visiting Japanese Defence Minister Yasukazu Hamada on Friday, the Oriental Morning Post said, in discussions that took place after a recent spike in tension in the South China Sea.

"China's navy is currently rather weak, we need to develop an aircraft carrier."

Liang's comment is the highest-level recent confirmation that China aims to acquire an aircraft carrier, a sophisticated piece of military hardware that can be used to project power far beyond a nation's shores.

It comes after several similar calls in recent months by senior members of the People's Liberation Army.

"Building aircraft carriers is a symbol of an important nation. It is very necessary," the China Daily quoted Admiral Hu Yanlin as saying earlier this month.

"China has the capability to build aircraft carriers and should do so."

Defence Minister Liang was speaking after Chinese vessels confronted and nearly collided with a US naval surveillance ship in what Washington says are international waters off south China earlier this month.

The confrontation was described by US intelligence director Dennis Blair as the most serious military incident involving the two powers since a US spy plane collided with a Chinese fighter jet in April 2001.

China said the US naval ship Impeccable was carrying out illegal activities in its exclusive economic zone.

Beijing has also reacted angrily to a Philippine law passed earlier this month that laid claim to parts of the Spratlys Islands in the South China Sea which are claimed by China and other nations in the region.

China called the law "illegal and invalid," and dispatched a civilian patrol boat to the region.

Posted by Coatepeque at 3:57 PM