In 1984, China imported the Romanian TAB77 8x8 wheeled APC technology but it never entered production. In the 1980s, as the PLA shifted its doctrine from an all out people's war to a "local war under local condition," the wheeled APC needed to accommodate its newly designated rapid reactive units. A number of proposals were suggested, among them, the WZ551 and the TAB77.

The WZ551 was one of the first joint Sino-Western European defense projects and its success was far from certain. It was inspired by the French VAB (Vehicule de l'Vvant Blinde) design but armed with a Chinese turret and powered by a German Deutz engine. The follow up Sino-French project of the NGV-1 IFV fitted a French Giat Industries Dragar powered turret onto the chassis of the WZ551. It failed to secure any customers.

The TAB77 is a less ambitious -- it called for a direct adoption of the Romanian production design incorporating a twin diesel engine. In some ways, it served as an inexpensive and proven option to the WZ551 project.

The WZ551 is heavier (15.8 Ton vs 11.5 Ton) and wields greater fire power (one 25mm cannon vs a 14.5mm). After a series of tests, the WZ551 proved to also have greater cross-country mobility thanks to its 320hp German Deutz engine, while the TAB77's 120hp twin diesel proved inadequate in comparison. The imported TAB77 was stored away in Norinco's warehouse and the project was discovered two years ago when it was put on display at Norinco's museum. 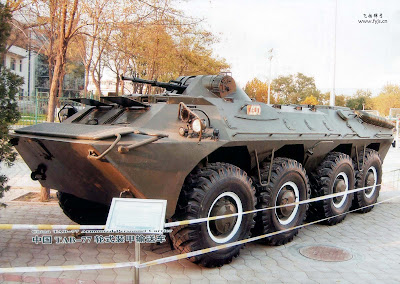 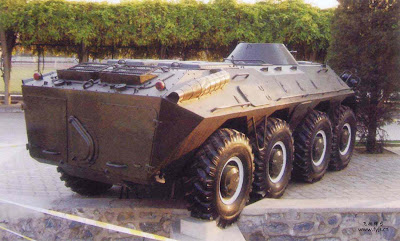 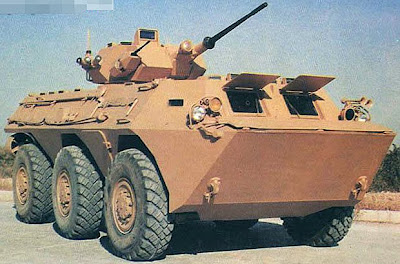 Posted by Coatepeque at 4:59 PM

Email ThisBlogThis!Share to TwitterShare to FacebookShare to Pinterest
Labels: Tab77

>Romanian production design
TAB77
It is a licence variant of Russian BTR70
http://en.wikipedia.org/wiki/BTR-70

Interesting the the PLA would choose another design AFTER they tested the BTR-70/80.

It must have been that the performance of the WZ-551 was better than the competing Russian APC's.