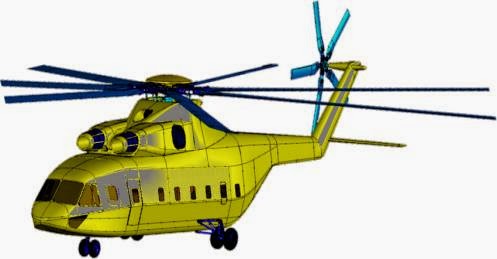 
BEIJING, January 21 (ChinaMil) –During the Wenchuan Earthquake in 2008, an all-red Russian-made M-26 helicopter, the largest helicopter in the world, was frequently seen on TV. It lifted a large number of badly-needed goods and materials to the disaster-hit areas, impressing the public.

However, there were only two M-26 helicopters in China at that time, and they were the only helicopters that were able to lift those lifesaving heavy-duty machines.

An insider from the military industry system of Russia said in an interview that the heavy helicopter being jointly developed by China and Russia is slightly smaller than the M-26 helicopter. With China's needs taken into full consideration, it is usable at high altitude, reported Interfax, the Russian news agency.

With the help of Russia who possesses strong technical strength in helicopters, this advanced heavy helicopter tailor-made for China is taking shape.

In as early as 2010, Andrei Shibitov, Chief Executive Officer of the Russian Helicopters, declared at a news conference that Russia and China would jointly develop 30-35 tonnage helicopters.

The reports in recent years show that such heavy helicopter jointly developed by China and Russia becomes smaller but more practical.

Dmitry Rogozin, Russian chairman of the Preparatory Committee for Regular Meeting between Chinese and Russian Prime Ministers and deputy prime minister of Russia, said after talking with the Chinese side in August 2013 that Russia and China might jointly develop extra-heavy helicopters whose carrying capacity doubles that of the M-26 helicopter.

Aleksandra Mikheyev, general manager of the Russian Helicopters, said at the Zhuhai Air Show in November 2014 that the contract would be signed for the China-Russian heavy helicopter joint development project in two or three months, and the aerodynamic configuration and flight performance parameters of the helicopter would be determined by February 2015.

Mikheyev said that the model is evolved from the M-26T helicopter, its take-off weight and carrying capacity are all smaller than those of the M-26 helicopter, but it is equipped with the M-26's D-136 engine, and therefore is superior to the M-26 helicopter in terms of thrust-weight ratio and mobility.

The latest coverage of the Russian media, however, described the helicopter as "with a take-off weight of 38 tons and a carrying capacity of less than 15 tons, it can be used on plateaus under thermal climate conditions", which is not a copy and simple improvement of the M-26 helicopter.