There have been speculations that PLAN would parade this new nuclear attack sub in the coming Naval Review in Qiangdao as one of the “surprises” stated by Wang Fushan, deputy commander-in-chief of the North Sea Fleet, let’s wait and see. 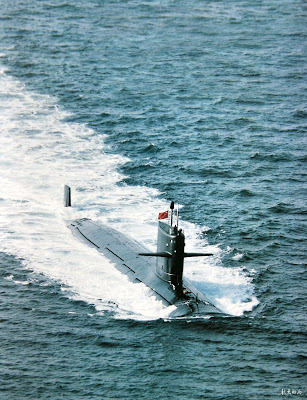 http://www.yourindustrynews.com/success+and+pirie+deploy+for+international+fleet+review_28588.html
Success and Pirie Deploy for International Fleet Review
Friday, Apr 03, 2009
International maritime ties will be strengthened with Royal Australian Navy Ships Success and Pirie departing Darwin for Qingdao, China tomorrow to take part in the Chinese International Fleet Review.
The Royal Australian Navy ships will join units from 15 other nations from 20 – 24 April to celebrate the 60th Anniversary of the establishment of the People’s Liberation Army – Navy (PLA-N), after an invitation was extended in 2008.
The International Fleet Review coincides with an International Naval Symposium at which the Chief of Navy, Vice Admiral Russ Crane, AM, CSM, RAN will join leaders from up to 30 nations will gather to discuss ‘Strengthening Maritime Cooperation. Building Harmonious Oceans Together."
"The Symposium is a valuable regional forum and I look forward to meeting with my fellow Chiefs from other nations, to discuss issues of shared professional interest," said Vice Admiral Crane.
Success and Pirie will remain in Qingdao after the symposium to conduct ANZAC Day commemorative activities in support of the Australian Embassy. Success will then join ships from other nations in the South China Sea for Exercise Bersama Shield, an international exercise aimed at developing joint operational capabilities of the five Power Defence Arrangement (FPDA) nations, involving Australia, United Kingdom, Malaysia, Singapore and New Zealand.
Bersama Shield will bring together air, ground and naval forces and enhance the interoperability of participating nations. The exercise aims to promote professionalism, enhance the exchange of ideas, deepen knowledge of each member’s strengths and capabilities, and most importantly form personal relationships through engagement.

Posted by Coatepeque at 9:26 AM