Social Realism is alive and well.

I just love this photo taken by XXXmadD in Shanghai yesterday on a new Type054A under construction , it has elements from some of my favorite Social Realism posters: Those rusty tubes, those towing cranes, the gray sky, and those small and distanced workers. It was the best of times, it was the worst of times. Oh, the good stuff, the essence of propaganda. 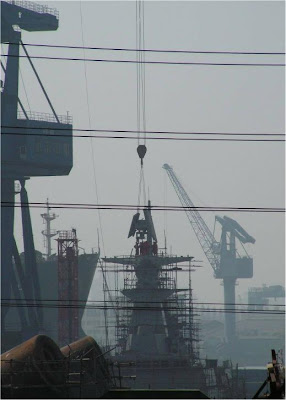 Social Realism developed as a reaction against idealism and the exaggerated ego encouraged by Romanticism. Consequences of the Industrial Revolution became apparent; urban centers grew, slums proliferated on a new scale contrasting with the display of wealth of the upper classes. With a new sense of social consciousness, the Social Realists pledged to “fight the beautiful art”, any style which appealed to the eye or emotions. They focused on the ugly realities of contemporary life and sympathized with working-class people, particularly the poor. They recorded what they saw (“as it existed”) in a dispassionate manner. The public was outraged by Social Realism, in part, because they didn't know how to look at it or what to do with it (George Shi, University of Fine Arts, Valencia)

Posted by Coatepeque at 6:44 PM