To our Pakistani readers; here a photo of FFG251 in China before she heads home to Pakistan. 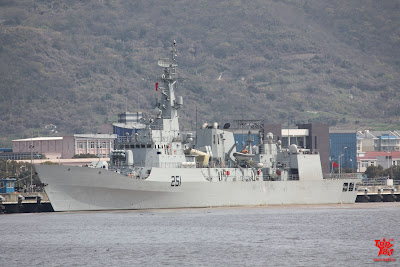 The meeting discussed ongoing defence projects built with Chinese assistance, -- especially the JF-17 Thunder aircraft and F-22P frigates. Both sides expressed satisfation over the progress made in the projects.

Mukhtar said Pakistan attached great importance to ties with China – “a country that has always supported Pakistan in trade, economy and defence”. He praised the professionalism shown by the Chinese Navy while participating in the recently held ‘Aman Exercise 2009’ along with the Pakistan Navy. He hoped that such exercises would bring the two navies further closer and help both sides benefit from each other’s experience. He also said that Pakistan would provide all possible support to Chinese ships engaged in anti-piracy operations.

Lt General Jia called for further promoting closer ‘military-to-military cooperation’, to meet the challenges confronting the region. He praised Pakistan’s role in the war on terror.

Posted by Coatepeque at 9:01 PM