The PLAN Navy Review marks the homecoming of two ships, Bangladesh BNS Osman and Royal Thai Navy HTMS Taksin. For both, it is their first trip back to China since the transfer.

BNS Osman, formerly FFG556 was sold to Bangladesh on 26th of September, 1989. Originally, it was equipped with the standard Jianghui I class weaponry of that time (2x 1 100 main gun, 2x6 SY-1 SSM) most of them were replaced in number of upgrades.

From this photo released by PLA daily, the new 2x4 C802A SSM is clearly visible. Other upgrades included a new 2x2 100 mm main gun, a new combat datalink and a pair of new Caterpillar Marine diesel. Rumor of a new sonar suit has been reported. 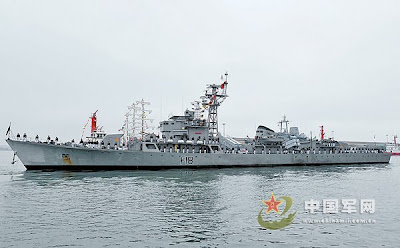 HTMS Takin, one of the two Naresuan class FFG build by Shanghai’s Zhonghua shipyard. It was launched in May 14th, 1994 and commissioned in September 28th 1995. It is equipped with a mixture of Chinese and NATO equippments; 1x Mk41 8 cell VLS SAM, 2x4 McDonnell Douglas Harpoon SSM, and 1x FMC 5 in Mk 45 Mod 2 main gun. It is powered by two GE LM2500 gas turbines and 2 German MTU diesels. 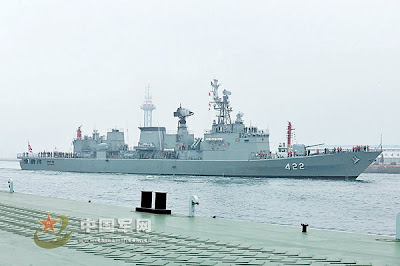 QINGDAO -- China will display its nuclear-powered submarines for the first time in history during a fleet parade to mark the 60th anniversary of the People's Liberation Army Navy, a senior navy officer said in Qingdao Monday.

China's nuke submarines up for maiden parade
The Chinese navy's missile destroyer 115 Shenyang is docked at Qingdao Port April 20, 2009 for an international fleet review to be held on April 23 to celebrate the 60th anniversary of the founding of the People's Liberation Army Navy. [Agencies] More Photos

Ding Yiping, deputy commander of the PLA Navy, made the remarks during an exclusive interview with Xinhua, but did not disclose any further details about the submarines.

In addition to the fleet parade, there will also be seminars and a sampan race that will be held off the coast of the eastern city of Qingdao during the four-day celebration.

"It is not a secret that China has nuclear submarines, which are key to safeguarding our country's national security," Ding said, adding that the number of China's nuclear submarines were far less than those of the United States and Russia.

Ding stressed that China's national defense policy and nuclear strategy is purely defensive in nature, and that the country's naval forces would not pose any threat to other countries.

"The PLA Navy will continue to make contributions to maintain world, regional and maritime peace," he said.

The fleet parade will strive to be grand, practical, safe and frugal, the officer added.

The parade would be grand as it was unprecedented in terms of the celebration scale.

Dozens of Chinese naval ships and planes and 21 naval vessels from 14 countries will participate in the fleet review, slated for Thursday, he said.

He said it is the first time for the country to have a fleet parade participated by high-level naval delegations from 29 countries.

Frugality is the professional virtue of both the Chinese navy and their foreign counterparts, he said.

The whole celebration will feature the concept of practicality. All activities must have an actual effect rather than just being aesthetic and pompous.

To ensure the safety of the celebrations, the navy and local public security departments had worked out a detailed security plan which had referred to that of the Beijing Olympics, he said.

All the Chinese naval vessels and weapons displayed during the fleet review were domestic-made. Most of the participant naval vessels were from the Beihai Fleet, with a few from the Donghai Fleet and Nanhai Fleet.

Some of the Chinese vessels are new while some of them have already served for some time, he added.

Ding called the maritime gathering a naval "Olympics" as a variety of foreign vessels would participate in the fleet review, ranging from warships to auxiliary vessels, and from big naval ships with a displacement more than 10,000 tonnes to smaller ones with several hundred tonnes.

The foreign vessels' order would be arranged in conformity with the international practice during the fleet review, he said, adding the warships would sail in front of the auxiliary vessels; ships with bigger tonnage sail in front of the smaller ones; and vessels of the same type and tonnage would be arranged in alphabetical order of their home country.

Posted by Coatepeque at 7:30 PM

Kolkata Web Design Company
One of the leading web design company of Kolkata, Acesoftech has been actively involved in web design, web development and Search Engine Optimization services. The company provides you affordable web site design, web site development and Search Engine Optimization services. While there is no chance of compromising with the quality, our prices are most competitive.