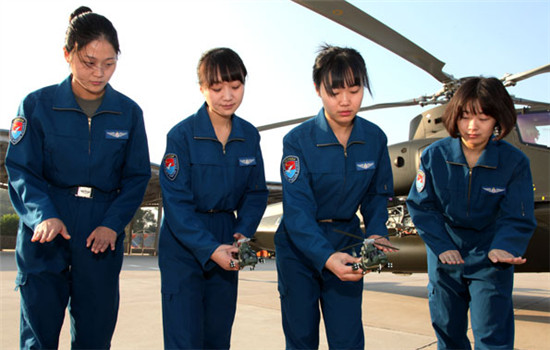 Five women are training to be the People's Liberation Army's first female combat helicopter pilots, the PLA has announced.

Yun Lu, Pu Yuting, Zhou Jiao, Wang Wenjuan and Liaohuang Xiaochuan all flew fixed-wing aircraft for the PLA Air Force before they were selected for training by the PLA Army aviation unit in 2014.

The five have completed many training courses and will soon be combat-ready, according to a news release from the PLA.

The women have overcome many difficulties, such as having to forget old operational practices for fixed-wing planes, and have done exercises to build their physical strength, it said.

Pictures from the PLA show the female fliers training in a WZ-9, a military variation of the French Eurocopter Dauphin, and a WZ-10, the country's first domestically developed attack helicopter.

Among the five women, Yun has the most remarkable record. She is one of the first Chinese women capable of operating a fighter jet and has flown multiple types of fixed-wing planes, including the JL-8 trainer and J-7 fighter jet.

She trained with Yu Xu, a female member of the PLA Air Force's August 1st Air Demonstration Team, who died on Saturday during flight training and has become a national hero. Both women, together with 14 other female high school graduates from across the country, were enrolled at the PLA Air Force Aviation University in September 2005.

The PLA Air Force has not disclosed how many female aviators it has flying transport helicopters.

Western defense observers speculate that the PLA Army's aviation unit has about 1,000 helicopters, including nearly 100 WZ-10s.

In the United States, women are a significant force in the military's helicopter fleet. In 2014, around 10 percent of U.S. Army helicopter pilots were women, according to a report released by the U.S. Army that year.

There are many female aviators in the U.S. Army who have operated the world's most powerful attack helicopter, the Boeing AH-64 Apache, U.S. media have reported.