This latest North China Institute of Vehicle Research prototype achieved 50km/hour during a calm water speed test.. If verified, it will place it at the forefront of the high speed amphibious expeditionary fighting vehicle race.

The prototype weights in 5.5 tons. Its four wheels can retrace to the chassis at 70 degrees thus reducing resistance during a high speed sprint .  This retracing mechanism is controlled via a digital stabilizer integrated into the suspension.  Since this is still a prototype/POC, the light armor on its chassis is not unexpected.

What's unknown at this point are its range (land and sea), cruise speed, development status and buoyancy 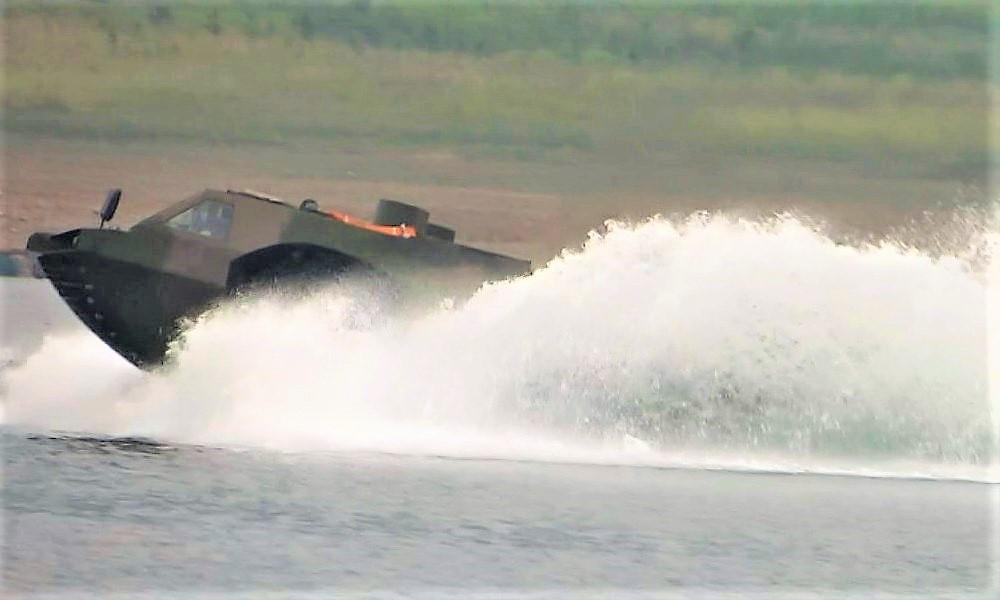 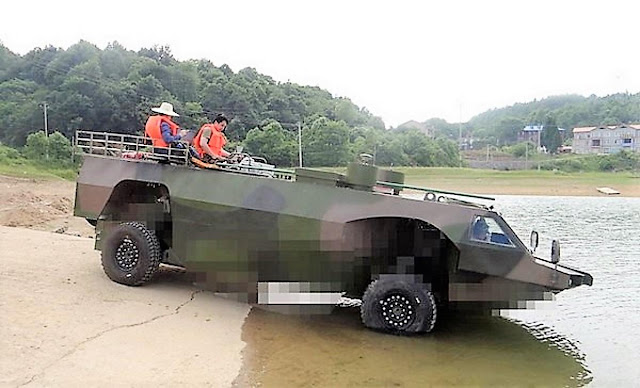 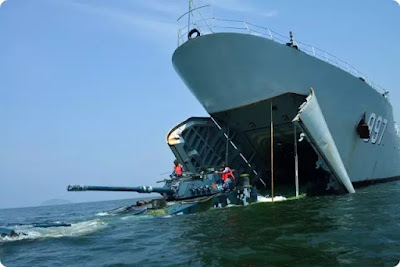 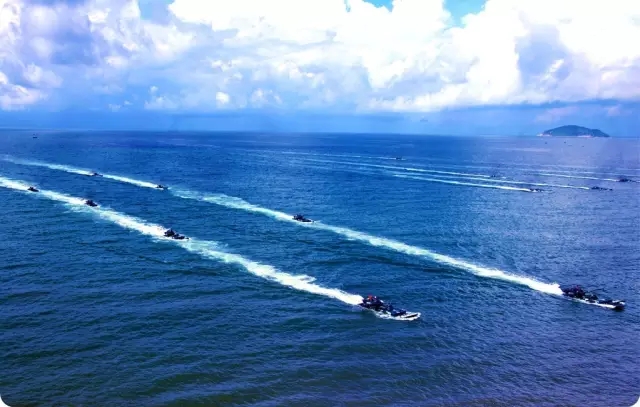 But who cares, those "million-man swim" PR photos are the real gem here! 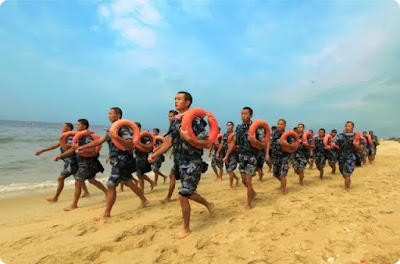 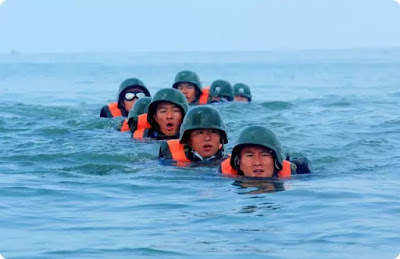 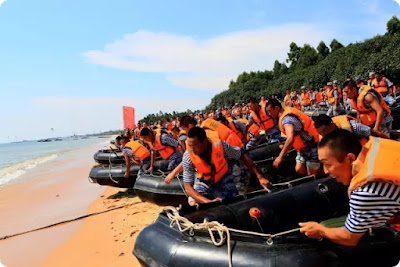 The 14th conducted a brigade size, live fire, amphibious assault drill last week.  No big deal, that is what they do.  Besides, according to United States Army war College's 2015 study "The Chinese People's Liberation Army in 2025"  (link here)

"Strategic sealift beyond Taiwan is quite limited. China has never possessed a robust capability to transport and land troops under combat  conditions"  (page 217)

First among these limitations is the capability to transport and sustain more than one division of ground troops and equipment by sea or air, according to the US DOD report to Congress on China's military [down from three four decades earlier]. The PLA Navy’s total amphibious lift capacity was estimated in 2009 to be one infantry division of approximately 10,000 troops and equipment at one time.

If China has learned anything in decades of conflict with Taiwan, it is that an all-out invasion of Taiwan is well beyond its capabilities. The joke commonly heard among Western military experts is that a Chinese assault on Taiwan would have to be called ''the million man swim.''


To perform this historic "million man swim"  the PLA could call up their two Marine Brigades, two Amphibious Mech Infantry Divisions (the 1st of the 1st Group Army, and the 124th of the 42nd Group Army) and every unit of the 1st, 12th, 31st, 41st and 42nd Group Army of the East Theater Command.  No worries, they will be dressed up but with no boat to go.

Click on the vid below to see the amphibious assault drill 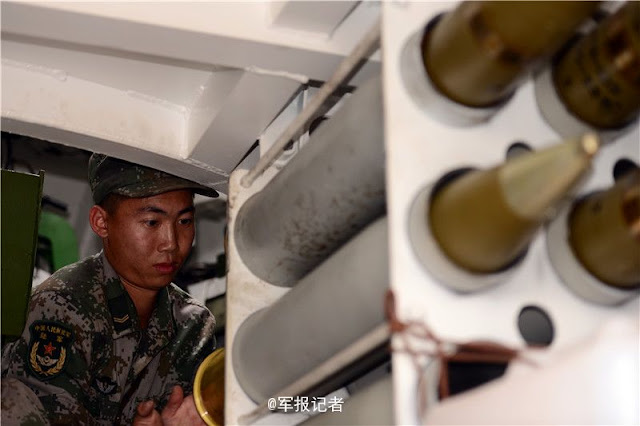 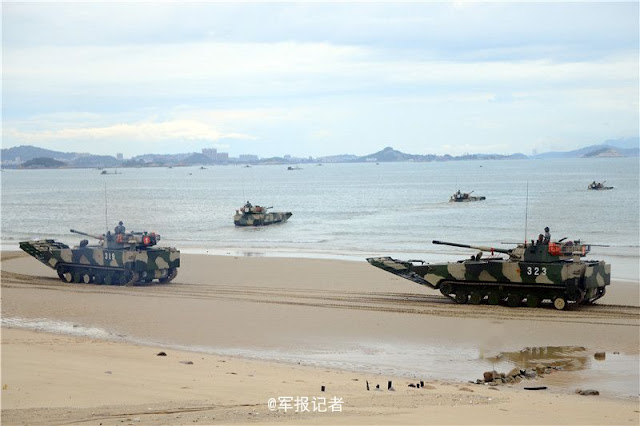 This prototype look impressive, however, they don't transport much, and would have short legs, and have a hard time crossing open water like the Taiwan Strait. The NYT article quoted is from 20 years ago, but is only more true today.
The invasion of Taiwan has not logistically been a serious threat since June 1950 when Mao saw the North Koreans invade South Korea. In only days Mao began to shift hundreds of thousands of Chinese troops poised to invade Taiwan to Korea, believing the Americans would not hold at the 38 parallel. Since then, invasion of Taiwan has not logistically or economically made sense. Mainland China in several 20 year plans has begun to economically assimilate Taiwan.
Countries in the South China sea have asked for military assistance from the US to ward off Chinese encroachment. However, the United States has a global war on terrorism that requires the bulk of its operational forces to sustain. In the long term - especially the past 15 years, the cost to maintain a global counterterrorism presence has gutted the American military. The US needs relief, which allies in Europe cannot afford to fund.
Along with and within China's the "Belt and Road Initiative" or One Belt, One Road (OBOR), China is cutting trade deals including favorable tariffs and large industry segment purchases with countries around the South China Sea. The Chinese military is also interacting with the militaries of those countries, including providing disaster relief to the Philippines - traditionally a US role. These countries likely see China on the rise in the long run, and the United States going the way of Britain and France. China's neighbors are hedging their bets.
China does not have a free market economy like the rest of the world. As Deng Xiaoping said in the late 1980's, China has developed "capitalism with Chinese characteristics." In the same way, China will develop democracy with Chinese characteristics. The United States needs to be able to think and accept a different way of Chinese accomplishing similar out comes and not let the past be the only guide to predicting and preparing for the future.

When Qaddafi's regime fell, Chinese evacuated 35860 Chinese nationals from Libya and Chinese firms lost billions in investments. Since, the Chinese government no longer backs Chinese investments wholesale, China must develop the ability to project and effect global force projection in the scale and scope to that of the US and its Navy. In addition to taking part in counter piracy operations off of Yemen since 2009, the PLA has combat battalions conducting UN Peace Keeping operations in South Sudan. In February 2016, China began construction of a naval base in Djibouti, on the Horn of Africa in support of the Chinese military operations in Africa.

China will continue to increasingly project economic power around the world, which requires them to also project military power to protect that commerce.