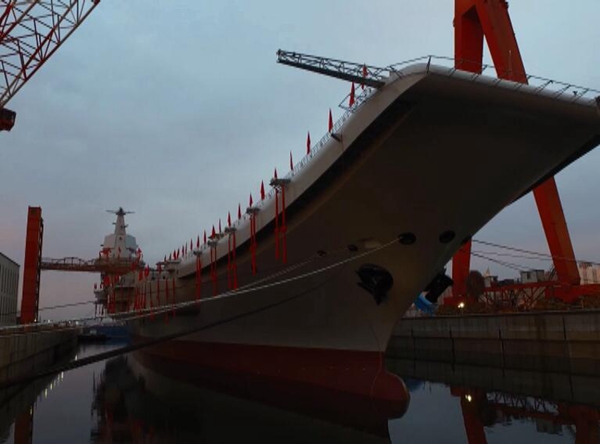 Hu introduced that construction of China’s second aircraft carrier, also the country’s first homemade one, is going well after it hit the water in Dalian on April 26 this year. Hu added that the carrier will likely start mooring trials next month ahead of schedule to test if its equipment is able to meet the requirements for further sea trial.

China’s first aircraft carrier, the Liaoning, has been delivered to the Chinese Navy for training and research. China’s second carrier will be based on the Liaoning and will be among the world’s most advanced, further improving China’s research and development of aircraft carriers, according to the director.

Hu also disclosed that a total of 412 state-owned enterprises, private enterprises, and scientific research institutions in China have contributed to its development, occupying 77.4 percent of the total, which indicates that its construction is the result of national collective efforts.

In addition, through construction of the carrier, China has possessed a talent team at an average age of 36 and gained the ability to independently research and develop, design, and manage an aircraft carrier project, which has laid a foundation for the country to build better ones in the future, the director noted.
Posted by Coatepeque at 4:47 PM