A new must-read by Ken Allen: Commanders of the PLA Air Force 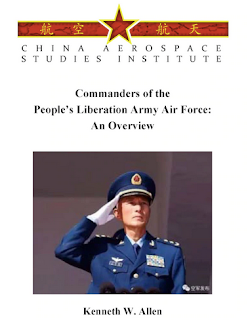 In the era of great power competition, it is important to understand all of the actors. Not just organizations and structure, but people as well. On 27 August 2017, Lieutenant General Ding Laihang became the 12th Commander of the People’s Liberation Army (PLA) Air Force (PLAAF) since 1949. He received his third star with the rank of General in July 2019.i He is expected to remain in this billet until the Chinese Communist Party’s (CCP) 20th Party Congress in October 2022, at which time he will meet his mandatory retirement age of 65.

While the PLA is organized differently from the U.S. Air Force, and those of our allies and partners around the world, and it isn’t a one to one match with the U.S., it is important to understand who leads the PLA’s Air Force, where he came from, and who might succeed him.

This report provides an overview of General Ding’s predecessors, his career, how PLAAF Commanders are selected, and the role that the PLA Air Force
Commander plays. It also makes a prediction about the officers who might be eligible to replace him in 2022 are.

We hope you find this volume helpful in parsing the PLA’s leadership, and understanding some of the counterparts to our own aerospace forces.