Communist Propaganda of the day: NYT article on the PLA

BEIJING — The founding of the People’s Liberation Army on Aug. 1, 1927, is a date known to all in China. It is commemorated annually with speeches and promotions and every five years by major cultural celebrations.
Enlarge This Image

Works like ‘‘Clouds on the Horizon,’’ by Gu Guojian of the Lanzhou Military Region, are on display in Beijing until Aug. 8. 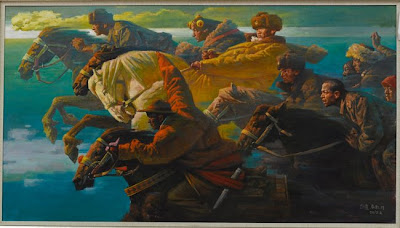 A sortable calendar of noteworthy cultural events in the New York region, selected by Times critics.

“The Chinese military places great importance on arts and culture,” said Li Xiang, curator of the art exhibition, which opened July 27 and runs until Aug. 8 at the National Art Museum of China. “It has always been this way.”

Since the earliest days, the Communist Party and the People’s Liberation Army, or P.L.A., have maximized the value of the arts as tools of propaganda. As Mao Zedong said in 1942, “To defeat the enemy we must rely primarily on the army with guns. But this army alone is not enough; we must also have a cultural army, which is absolutely indispensable for uniting our own ranks and defeating the enemy.”

The P.L.A. is one of the most important arts organizations in China. In Beijing, it has an arts university, opera house, opera, symphony orchestra, drama troupe and numerous bands. The navy, air force, and Second Artillery, which come under the P.L.A., have their own art troupes, as do the political departments of the seven major military regions. The Jinan Military Region’s Advance Guard Modern Drama Troupe and the Nanjing Military Region’s Front-Line Modern Drama Troupe have each produced hundreds of stage dramas, movies and television series. Such troupes perform regularly for soldiers, disaster victims and international cultural exchange events.

The P.L.A. is a regular participant in television song and dance competitions. Its performers often win. When they don’t, the army has been known to recruit those who do — a practice that has been criticized. It is known for producing major stars: The folk singer Peng Liyuan, the wife of Vice President Xi Jinping, rose through army ranks and the Grammy-nominated singer Song Zuying comes from the Naval Song and Dance Troupe.

The P.L.A. also provides opportunities to artists who don’t fit traditional molds, like the Tibetan folk singer Han Hong, who by her own admission lacks the glamour of most pop stars, and the modern dancer and choreographer Jin Xing, who had gender reassignment surgery after leaving the army and staged her first major show as a woman in a P.L.A.-affiliated theater.

The role of the visual arts is perhaps lower profile, but no less significant, as is documented by the exhaustive, often fascinating 85th anniversary exhibition at the National Art Museum of China.

“More than 12,000 works of art were submitted,” said Mr. Li, the museum’s curator. “This was a national selection process: Anybody could participate, but the work had to have a military theme.”

To cull the submissions, Mr. Li, who oversees all the army’s visual artists, assembled 60 judges from military and civilian life, and, using photographs, asked each to select 20 works.

Artists who made the cut were asked to ship their works to Beijing, where the field was narrowed to the 568 pieces on display. They cover a range of styles and media loosely divided into oil painting and traditional Chinese painting (guohua) with sculptures, installations and a handful of other forms. Approximately half are by active military members and half by civilians.

Mr. Li, in explaining the main criterion for inclusion, said: “Aside from military content, we judged on artistic merit. And two other qualities are very important: patriotism and heroism.”

A number of works, especially oil paintings, deal with great historic moments or figures, most notably the young Mao. Dou Hong’s “Grassland” depicts Mao seated with his men around a campfire, a crescent moon above his head; Qin Wenqing’s “Xibaipo — March, 1949” shows him bathed in a halo of sunlight, addressing his men on the eve of their fight for Beijing. “In the Interest of the People,” a spectacular, intricately detailed black and white woodblock print by Dai Daquan and He Fengling, depicts Mao carrying the coffin of Zhang Hao, a Comintern representative, through a sea of mourners in 1942.

“That was the only time Mao ever carried a coffin,” Mr. Li said. “And it is nowadays very rare to have such a big woodblock print.”

Some paintings allude to contemporary political issues, like those that portray islands contested by China and other countries. “Women soldiers in the Xisha,” by Huang Yuanchao, is a color brush painting that shows three female soldiers in camouflage pants and striped shirts posing cheerfully on a breezy beach. Mr. Li’s own “Nansha Sky Shower” depicts five male soldiers showering nude in a rainfall. Mr. Li visited Nansha (known in some countries as the Spratly Islands) several years ago to “experience life” — an important part of being a military artist — and painted it on his return. Military artists, he explained, are pretty much free to travel — money is not an issue.

Some of the works on display demonstrate the tricks of the trade. A few paintings were simply traditional Chinese landscapes to which, on a tiny house snuggled in a valley, a political slogan had been added. Some became military-related by virtue of title, like a big bouquet of red roses that, the title informed, was intended for soldiers. Some works bore the names of up to a half dozen artists — that, an artist in the gallery explained, is a military tradition; the actual artist adds the names of his students, or his superiors, as a sign of respect. A work with two distinct styles, on the other hand, may have been painted by two people: the artist and the commanding officer who thought he could improve it. Absent from the exhibition is any abstract art. “The leaders don’t understand it,” one artist said. “It has to be realistic.”

Perhaps the biggest category of works (often traditional paintings) are those that portray ordinary soldiers in moments that are not only heroic, but intimate — marching through the snow or listening to iPods; shooting rifles or drinking Coke; jumping from airplanes, playing violin or vamping in tight skirts. A good example of this is “Commendation,” a sensitive portrayal of seven soldiers in battle fatigues superimposed on an award certificate; the men depicted are young recruits trained personally by the artist, Song Shibing.

It is this intimacy that pulls many works back from the precipice of overt propaganda — a problem inherent in such an exhibition.

“There was propaganda in the past, and there’s propaganda now,” Mr. Li said. “Every country has it. But some propaganda is rigid and some isn’t. Now, we put greater emphasis on artistic quality — this is becoming increasingly important.”

Mr. Li also stressed the significance of the socialist fine arts tradition the P.L.A. helps to maintain — “Only China is still doing this,” he said, suggesting that outsiders might find value in that.

“I think Americans would really like this show,” he said. “There’s nothing the American people like more than new and unusual things. And, we need more contacts — then we’ll understand each other better.” 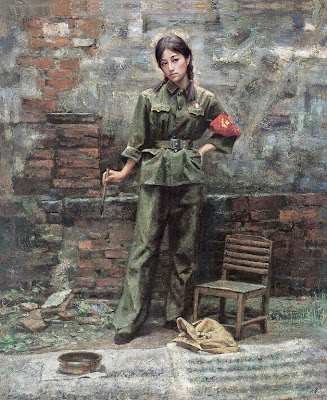 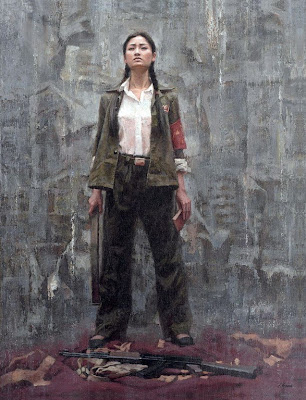 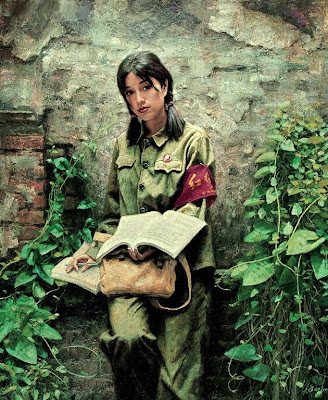 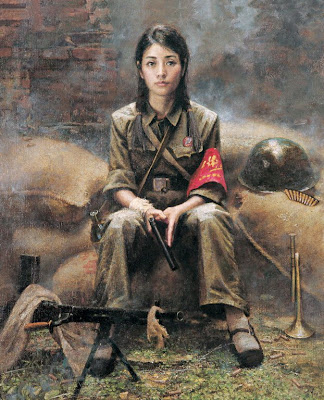