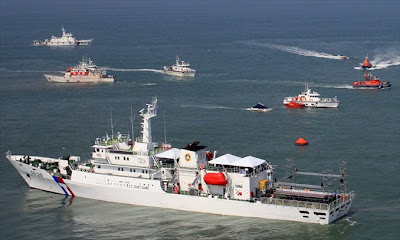 Around 600 rescue officers and coast guards from Taiwan and China took part in the exercise, which involved 18 vessels and two helicopters from Taiwan, as well as 11 ships and one helicopter dispatched by China.

The vice minister of Taiwan's Coast Guard Administration, Cheng Chang-hsiung, and China's vice transport minister, Xu Zuyuan (徐祖遠), jointly presided over the exercise in their respective capacities as honorary chairmen of the Chinese Search and Rescue Association and China's Association for Shipping Across the Taiwan Strait.

To avoid controversy, the vessels and helicopters of both sides sailed without flying their respective national flags, with drill flags used instead.

Cheng and Xu, each leading a group of officials, watched the exercise onboard the 2,000-ton Taiwanese frigate “Tainan.”

“It's the first time ever that Chinese government officials have been onboard a coast guard vessel from Taiwan,” Coast Guard spokesman Hsieh Ching-chin told reporters. “It's significant both historically and symbolically.”

The exercise played out a scenario where a passenger aircraft had crashed into the ocean, hitting a passenger boat shuttling between Kinmen and the mainland, the spokesman said. Other scenarios included rescue operations for overturned fishing boats and rescuing their passengers and crew, he said.

Meanwhile, Xu said yesterday that both the Chinese mainland and Taiwan have agreed to hold a joint maritime search and rescue exercise every other year, taking turns as host.

Xu made the announcement during the ongoing cross-strait maritime rescue exercise, the second such exercise since the first one in 2010.

The exercise aims to meet the mounting need for maritime emergency rescue abilities after the mainland and Taiwan started direct flights and shipments of commodities in 2008.

Last year, the maritime rescue coordinating center of Fujian province, which is on the opposite side of Taiwan across the strait, rescued 193 ships and saved 1,973 people through 209 maneuvers.

As of the first half of this year, cross-strait travelers rose 13.6 percent year-on-year to hit 840,000, while the volume of cargo and container transportation reached 27 million tons and 840,000 TEUs separately. 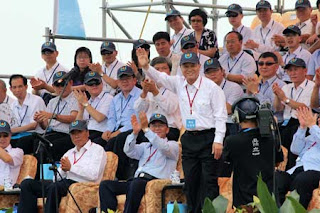