Back in July 2008, I posted a photo of Z-9D prototype 001 geared as a AShCM carrier equipped with a pair of TL-10 missiles.  Well, it now appears that the project is going no where with the prototype in storage. 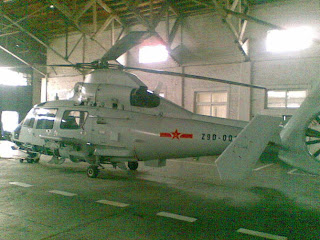 
This site may contain copyrighted material the use of which may not always
have been specifically authorized by the copyright owner. this site is
making such material available in its effort to advance understanding of
defence, military, world strategic developments, anti-terrorism issues and
tactics, humanitarian, education, democracy, and social justice issues, etc.
We believe this constitutes a 'fair use' of any such copyrighted material as
provided for in section 107 of the US Copyright Law. In accordance with
Title 17 U.S.C. Section 107, and such (and all) material on this site is
distributed without profit to those who have expressed a prior interest in
receiving the included information for research and educational purposes.
For more information go to:
http://www.law.cornell.edu/uscode/17/107.shtml. If you wish to use any
copyrighted material from this site for purposes of your own that go beyond
'fair use', you must obtain permission from the copyright owner.
Posted by Coatepeque at 3:40 PM