Critics of China will no doubt charge that this is nothing more than a PR plot to justify a larger navy, be that as it may, lives are being saved.    One thing for certain -- those rescuers could care less what those critics think while performing their duties.

An injured fishermen is loaded into an ambulance after arriving at a naval port in Sanya, south China's Hainan Province, Oct. 3, 2013. A total of 268 fishermen who were trapped by Typhoon Wutip in the South China Sea arrived in Sanya Thursday morning after 15 hours of sail in navy vessels. Rescue work continued on Thursday as 58 fishermen remained missing after three fishing boats sank near the Shanhu Island in the Xisha Islands, about 330 kilometers from the Hainan Island due to Typhoon Wutip on Sunday afternoon. (Xinhua/Zhang Yongfeng)

BEIJING, October 3 (ChinaMil) -- Upon receiving an order issued by the Navy of the Chinese People’s Liberation Army (PLAN) yesterday , the hospital ship Peace Ark changed it course and rushed towards the Xisha sea area to carry out the mission of rescuing fishermen. Two more helicopters from naval aviation force also flew to the related waters yesterday to search for survivors.

The Peace Ark is on its home voyage from Cambodia, which was the last stop of the ship’s “Harmonious Mission 2013” rounds of visits to eight Asian countries.

The Navy has expanded the sea area for search and rescue operations. The enlarged area is extended 5, 20 and 25 nautical miles in the directions of west, east and north respectively.

After completing today’s task of searching for typhoon survivors, the two helicopters which joined the rescue force yesterday will land on the destroyers Wuhan and Guangzhou respectively to continue to conduct search and rescue operations in the following days.

Rescue work continued on Wednesday as 58 fishermen remain missing in the South China Sea after three fishing boats sank due to Typhoon Wutip on Sunday afternoon, Xinhua said in a report.

BEIJING, October 2 (ChinaMil) -- The Navy of the Chinese People’s Liberation Army (PLAN) has reinforced its strength carrying out fishermen rescue missions in waters near the Xisha Islands with dispatching three warships and one rescue helicopter to the scene of accident, PLA Daily reporters learnt from relevant departments of the PLAN.

As of 17:00 yesterday, seven naval ships and one helicopter engaged in search and rescue operations in the sea areas near the Xisha Islands have saved eleven drowning fishermen and transferred 324 people to safe places.

At about 10 a.m. yesterday, the destroyer Wuhan (hull number 169) of the South China Sea Fleet of the PLAN saved two fishermen in the sea area 25 nautical miles northeast from the Shanhu Island. Both of them are fishermen working on the fishing boat Yuetaiyu 62108, which was sunk at 9:20 on September 30 by Typhoon Wutip.

Meanwhile，divers on a rescue ship of the South China Sea Fleet were conducting underwater operations to search for possible survivors and remains of typhoon victims.

The PLA Navy sent yesterday another three ships and one helicopter to join follow-up rescue operations. A landing ship of the South China Sea Fleet departed at 14 p.m. yesterday from a naval port in Zhanjiang, Guangdong province, heading to the Shenhang Island to transfer fishermen saved by rescuers from the island to Sanya City. The landing ship is scheduled to arrive at the mission waters at noon of October 2. 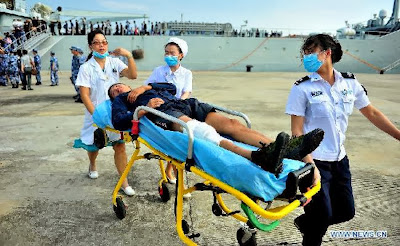 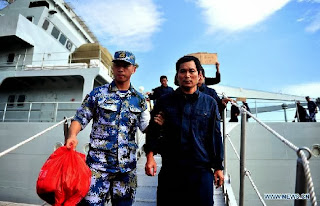 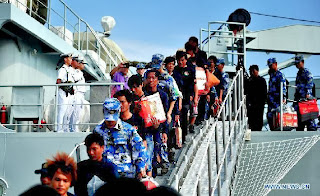 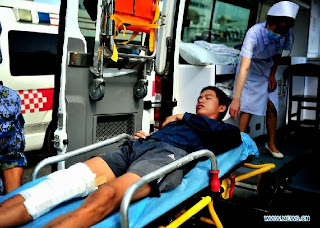 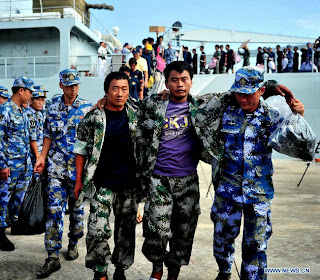 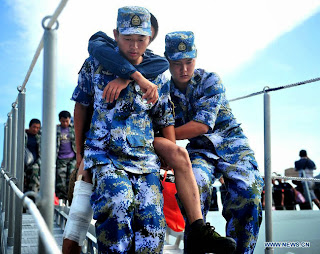 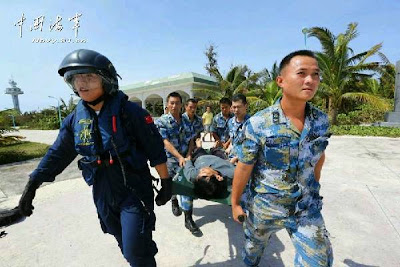 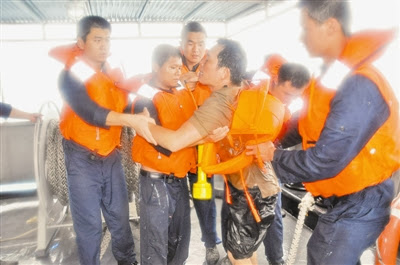 Posted by Coatepeque at 3:59 PM