With the PLAN Naval Review in the media spotlight, it might be a good time to examine how Japan is viewing this development. While both India and US are putting positive views on the new found power of the PLAN, see Adm Roughead's comment on current relationship between USN and PLAN as "positive" (here) and Indian naval chief's lecture "Harmonious Seas" given in a symposium in China (here)

Understandingly, Japan does not show the same level of "excitement", in light of the "display" by the PLAN back in Oct 2008 when a taskforce four Chinese naval vessels, including a destroyer and a supply ship, passed through the Tsugaru Strait on its way back to China after a Sino-Russian naval exchange. Dr Peter Dutton, member of the US Naval College, a noted expert on International law and martime policy wrote a very good article on this and other Sino-Japan related naval incidents in his "Scouting, Signaling, and Gatekeeping and the International Law Implications" (Click here to download the full article)

The Asia Pacific can be a complicated ocean.....

Four Chinese naval vessels, including a destroyer and a supply ship, recently passed through the Tsugaru Strait bound for the Pacific Ocean, officials from the Joint Staff Office of the Defense Ministry announced Monday.

Chinese naval vessels had previously sailed through the same strait, but it is the first time that Chinese vessels with attack capabilities have navigated through the strait.

The naval vessels had sailed in international waters and although it did not infringe upon Japan's territorial waters, the Defense Ministry believes the Chinese Navy is stepping up activities in the Pacific Ocean.

According to a Joint Staff Office official, the Chinese vessels' movements were discovered by a P-3C patrol aircraft used by the Maritime Self-Defense Force about 35 kilometers off Tappizaki cape on the northwestern tip of the Tsugaru Peninsula in Aomori Prefecture, on Sunday evening.

JMSDF DD 156 Setogiri in the background watching the PLAN taskforce 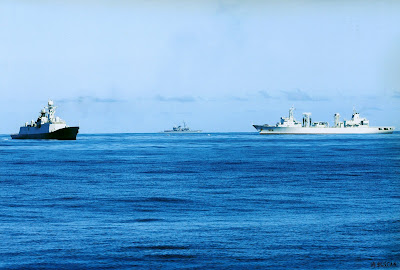 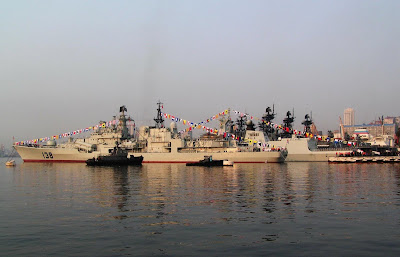 Some news capture from Japanese TV 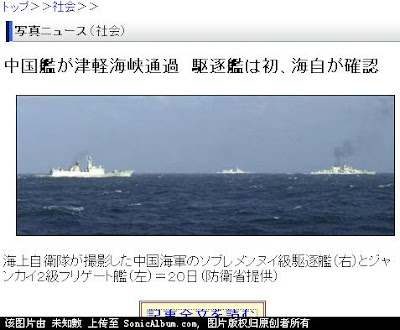 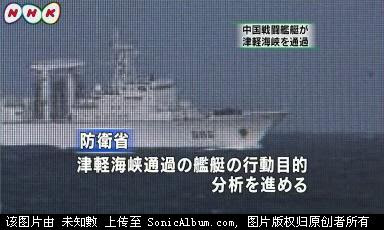