The Chinese need pilots for all those choppers they are buying. 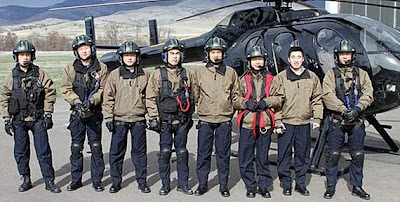 ASHLAND — When one of the globe's largest police forces needed search and rescue training, Brim Aviation didn't exactly flow off the lips of Shanghai authorities, and an atlas proved handy in finding Southern Oregon.

Thanks to a mutual associate, however, the Ashland helicopter company is now sharing its world-class expertise with eight of Shanghai's finest in preparation for World Expo 2010, which begins in May.

Never mind that Shanghai's population of 20 million is 1,000 times greater than Ashland, that its 45,000-member police force is double Ashland's population and that high-rises are packed together across the city's 20-mile girth.

Yet, with the world coming to visit China's central eastern coast at the mouth of the Yangtze River, the city — which is a province unto itself — decided to upgrade its ability to deal with aerial rescues. That's where Brim Aviation came in.

"A guy I knew said, 'You do training, these guys are looking for some help, and I'll put you together,' " said Burl Brim, the Ashland company's president.

A deal was firmed up last September for three months of training in the Western United States, followed by 30 days support by Brim Aviation personnel in China and consulting for the next three years.

Four pilots and four crewmen have been learning the finer points of rappelling, fast-rope pick-ups and short hauls with human external cargo along with first-responder, advanced CPR and first-aid classes.

"They're already helicopter pilots," Brim said. "They're very sharp, educated guys. We're teaching them disciplines we do. Currently, we're working with pilots on vertical reference training, the skill you develop to be able to do rope rescues."

More than 7,000 people per square mile are packed into Shanghai compared with 65 in Jackson County. Oregon's forests, however, are far thicker and Brim said that's a good starting place for learning the ins and outs of urban search and rescue.

"We do a lot of urban-type work," Brim said. "They have a huge river system through Shanghai, so they do a lot of water rescues and swiftwater training. Still, it's a very similar environment when you're working at altitude in the mountains. The confined areas in trees simulate tall buildings pretty well."

Beyond the Siskiyous and Cascades, Brim's staff is training the Chinese aviators in Portland and Seattle as well as Northern California.

"China is huge country with a lot of rural area there," Brim said. "I'm sure they have traveled throughout their country."

Language is no barrier, he said. "Some of them are very fluent and they've been immersed in English before they got here."

Brim Aviation has trained personnel for more than six years, primarily on a local level. Now the globe is its training field.

"This is a door-opener," Brim said, noting they have multiple contracts with Shanghai. "Initially, the students are here. As soon as they are done here, they will go back and establish mission profiles, patrol techniques and then rescue response right in their own environment."

By Tim McAdams
http://www.aopa.org/aircraft/articles/2010/100115china.html
In 2008 an earthquake in the Sichuan region of China resulted in many casualties, and Chinese officials cite the failure of emergency teams to reach inaccessible areas as the reason. A few months later a major earthquake hit Japan, but much fewer casualties were reported. The reason turned out to be the availability of helicopters to quickly reach the wounded. This has convinced China’s leaders that they must dramatically increase their helicopter fleet.

Li Daguang, a professor at the National Defense University, said, “The rescue work during the earthquake revealed China’s weakness in the helicopter industry. It does not match China’s current status in the world.” About 180 civilian helicopters are operating in the entire country. Chinese officials have stated a goal to have 2,000 civilian helicopters by the end of 2010 and 10,000 by 2020.

As a result, helicopter manufactures have responded by forming joint manufacturing partnerships. One example is Agusta Westland, which has established a joint venture with Jiangxi Changhe Aviation Industries Corporation to build the A109E light twin-engine helicopter in China. To support these partnerships, Beijing has built a new £750 million helicopter factory and research center in the northern city of Tianjin. However, Li cautioned that China still had a long way to go before it would be able to build a helicopter from scratch without Western input.

For most of the world, helicopters are important tools for disaster relief work and air ambulances; for developing countries, they have proved invaluable for construction work. With China now realizing that benefit, the country has become a bright spot in the struggling helicopter industry.