The earlier report speculating that China is assisting in training of the Afghan National Army(ANA)(here) has been confirmed with Karzai's visit to China. (here)

Chinese Defense Minister Liang Guanglie pledged military cooperation with Afghanistan and Nepal on Thursday when meeting his counterparts from the two countries.

In meeting with Afghan Defense Minister Abdul Rahim Wardak, Liang said China and Afghanistan had developed smooth relations since establishing diplomatic ties in 1955 and China appreciated the staunch support given by Afghanistan on issues relating to China's core interests.

The ANA's troop numbers had surpassed 100,000 and Afghanistan was dedicated to building its capacity to improve the security situation, said the Afghan Defense Ministry, with the goal of having a 134,000-strong army by the end of 2011.

Wardak said he hoped the ANA would be "strong enough to defend the country against internal and external threats" after NATO-led forces, particularly after the U.S., withdraws from the country.

Military-to-military cooperation between China and Afghanistan had developed smoothly in military supply and personnel training, said Liang, noting that all the aid offers were provided on an unconditional basis.

Wardak thanked China for its assistance and suggested both sides should cooperate more in the fight against terrorism, drug trafficking and organized crime.

In meeting with Nepalese Defense Minister Bidya Devi Bhandari, Liang said China attached great importance to bilateral military relations and was willing to boost personnel exchanges and cooperation to contribute to the security and stability of the two countries and the region at large.

Bhandari said her country was grateful for the training services China provided to the Nepalese military, hoping more help would come from China in the fields of information, hygiene and peacekeeping.

Bhandari reaffirmed that Nepal upheld the one-China policy and recognized Tibet as an inalienable part of Chinese territory. 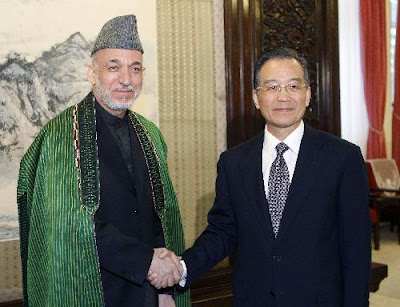 China should build more influence in Afghanistan. China should give military aid to Afghan army. Our rivals India only can offer worn out equipment. We need to seduce Afghan government. In our interest to have a neutral government in Kabul. A pro Indian nation that would be willing to host Indian troops would be bad.

Easy on the nationalistic sentiment, my friend.

Nationalism doesn't apply to China. It has too many ethnic groups. If you were to be nationalistic, it's going to be for Han Chinese, excluding Manchus/Tibetans/Uyghurs. Similarly, to Hitler, nationalism equated to Aryan Germans, excluding Jews. So say patriotism when you meet people like Type99, though he has a point about Kabul.

Note my first post, cites the need for a "neutral government" in Kabul, rather then a pro China one. But I get your point Coatepeque.