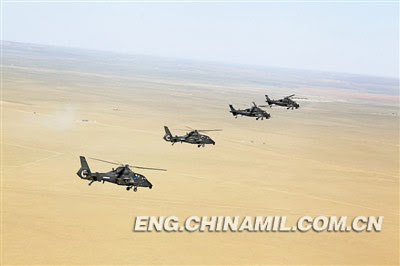 The reporters saw at the front line of the training of an army aviation regiment under the General Staff Headquarters (GSH) of the PLA that the regiment set up realistic environment to simulate actual combat, incorporated such highly-difficult subjects as hedgehopping flight and valley counter-attack into the tactic drill of air assault and special operation, and effectively elevated the operational capabilities of the helicopters as well as the overall quality of the pilots.

The recent assessment made by the Army Aviation Department of the GSH has showed that those new-type helicopters that troop units had equipped with have already formed the capability to carry out operations under various weather conditions and in complex environments as well as to perform diversified tasks.

By Shi Shaohua and Zhou Jingbo