This is not  news per se but confirmation from an "official" source is always welcome.   We at China Defense.com and many others have suspected that the J-31 is to be a carrier-borne fighter from day one. 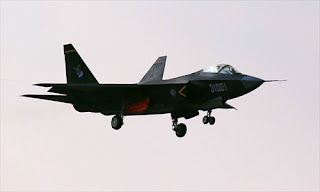 Sun Cong, chief designer of the J-15 carrier-borne fighter jet and a member of the National Committee of the Chinese People's Political Consultative Conference, accepted a special interview with Xinhua News Agency on March 2.

The J-15, nicknamed "lying shark", is China's first generation of carrier-borne fighter jet. When the piloted J-15 fighter landed on the Liaoning aircraft carrier for the first time and successfully took off, Sun was filled with excitement.

Sun said the carrier-borne fighters must have the same combat capability as the land-based fighters in terms of bomb load, combat radius, and maneuverability; it must have good low-speed performance. It also raised higher requirements in terms of blocking landing in the sea and ski-jump takeoff.

"The engine is the key. If we can halve the fuel consumption, the combat radius will increase." Sun said that a J-15 equipped with domestic engines can have a combat radius of more than 1,000 kilometers. Considerable progresses have been made in fire control radar and guided missiles. "The indicators of J-15 are generally close to U.S. F/A- 18 Hornet , reaching world-class standards."

To make sure the aircraft slides at a relative velocity of about 60 meters per second in a fixed and constant posture on the glide slope and land precisely on the fight deck, many key technological difficulties including the operation methods of the pilot, the technical design characteristics, and other aspects need to be overcome.

Sun is also the chief designer of the J-31. He hopes the J-31 can pair up with J-20 in the future in tasks of both high and low altitudes, to maintain continuing striking capability. He also hopes the improved version of J-31 can become China's next-generation carrier-borne fighter jet.

At present, Sun and his team are exploring key technologies of the next generation of fighter planes, and "will make breakthroughs in terms of whole time-domain, whole airspace, and greater combat radius".

i think it is just a careless typo.

This plane has received no interests from the PLA so far. Every possible sales channel is simply the manufacturer's wishful thinking at this point. Even the name is most certainly not J-31, as only the PLA can name the J-xx series. It is far more likely that 31001 means the 01 unit of the Shengyang project 310, i.e. a project started on March 10, probably in 2009.

I though Lockheed Martin designed the J-31 airframe...