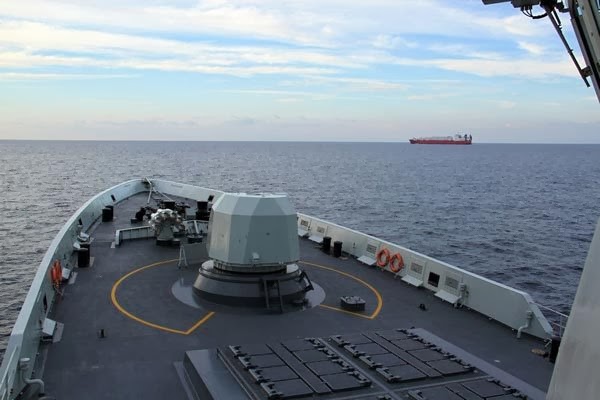 DAMASCUS, February 12 (ChinaMil) -- The officers and men of the guided missile frigate “Yancheng” of the Navy of the Chinese People’s Liberation Army (PLAN), who just received greetings from Chinese President Xi Jinping the other day, successfully accomplished the third mission of escorting the ships carrying Syria’s chemical weapons together with warships from Russia, Denmark, Norway and other countries at 16:47, local time.

The guided missile frigate “Yancheng” sailed into the territorial waters of Syria around 10:00, local time, to form a taskforce with the Russian guided missile cruiser “Peter the Great” and perform patrol surveillance in the designated waters.

An hour later, the Norwegian transport ship sailed into the Latakia port to load the chemical weapons while the liaison officers on both Chinese side and the Russian side maintained communication all the time to notify to each other about related situations.

Jin Xupu, chief of staff of the Chinese escort taskforce, told reporters: “Thanks to the previous joint escort cooperation, the good communication kept among all parties while more coordinated efforts and deeper understanding about the mission also contribute to the accumulation of valuable experience and the solid foundation laid down for the follow-up escort missions.”