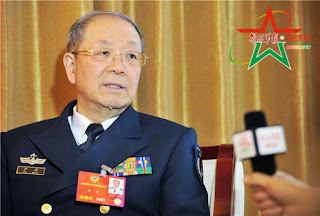 
China's second aircraft carrier will be larger and will be equipped with J-15 fighter jets, a rear admiral and a member of the National Committee of the Chinese People's Political Consultative Conference said.

The Liaoning has a full displacement of more than 50,000 tons, the Xinhua News Agency reported.

Yin said the new aircraft carrier will also feature a new design that will allow the vessel to carry more ammunition, aircraft and fuel, greatly improving its self-sufficiency and combat effectiveness at sea.

Yin also revealed that the aircraft on the new carrier will be similar to the Liaoning and will include early warning aircraft, anti-submarine aircraft and health evacuation helicopters, in addition to the J-15 fighters.

The construction of China's second aircraft carrier, the country's first to be independently designed, was announced by Ministry of Defense spokesperson Yang Yujun on December 31, 2015.
Posted by Coatepeque at 5:27 PM